Share All sharing options for: Ales Hemsky - Dehumanized and Commodified

There's been quite a bit of talk in the last several months about trading Ales Hemsky, and I understand why that is. When you have a good player on a good contract, you should be able to get something of value, and when your team is terrible, it seems smart to move present value for future value. This is especially the case when the player in question is a walking infirmary, as seems to be the case with Hemsky. So I understand why this is happening, but I just can't shake the idea that, if Ales Hemsky is willing to stay in Edmonton, the Oilers would be foolish to let him go.

The obvious reason not to move Hemsky is his play when healthy. He's phenomenal. You can see that with the eye test, and you can see it by looking at Derek's scoring chance analysis, which shows a player who's holding his own in difficult circumstances. But is he really? If we compare his chance percentage and Corsi percentage (which we know is the best proxy for zone time), the new information isn't all that encouraging:

As in the Jeff Petry article where I looked at defensemen, I've highlighted all of the players with a significantly different Corsi and scoring chance percentage. With the defenders there were a couple of interesting items, but in the top nine forwards, guys are all over the map! In general, the players are worse by the Corsi numbers, but the trio of Magnus Paajarvi, Linus Omark, and Sam Gagner buck that trend something fierce. Ales Hemsky does not. By Corsi numbers, he and Dustin Penner were the two worst-performing top nine forwards on the team. In addition, as Bruce points out, the power play this season was atrocious and Hemsky is the guy most responsible for making it hum. And how difficult are those circumstances anyway? Let's look at the zone starts for the top nine forwards: 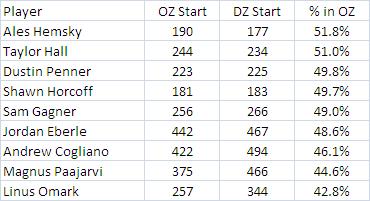 Um... what? I think before continuing I should note that the numbers above are from Vic Ferrari's tool, and that Vic's numbers differ significantly from Gabe's. Linus Omark, for instance, goes from 42.8% using Vic's tool to 53.4% using Gabe's, which is a massive difference. As such, I'm reluctant to draw too many conclusions from this char in particular. Well, except that I'd really like to know why there's such a massive discrepancy.

But for Hemsky, things don't change much. He goes from the top of the list using Vic's tool to the top of the list using Gabe's tool. In addition to the safe circumstances, we was always playing with quality linemates, and at least infrequently, he was playing weaker opposition. I don't know that we can really say that Hemsky was playing particularly difficult minutes this season.

Having now made the case for trading Hemsky, I'll now say that we should keep him. Naturally. All bad teams have a fundamental problem and the Oilers are no different: good players don't want to play for bad teams. Ales Hemsky is a good player. Strong percentages covered what was a weak season in 2010-11, but he has a long track record of success in this league and remains in his prime. If by some miracle Ales Hemsky wants to stay in Edmonton, and the Oilers can get him under contract at a reasonable number (I think a front-loaded five years at $5.5M + NMC is ballpark), then they need to do it. But they also need a deadline like, say, July 5th. If the date comes and goes, he's too valuable not to move, and too fragile not to move before the season starts.

Projection: Ales Hemsky doesn't sign and isn't traded; he scores at just under a point per game pace but only plays fifty to sixty games, getting injured just before the deadline, which prevents the Oilers from trading him. Hemsky then leaves as an unrestricted free agent.