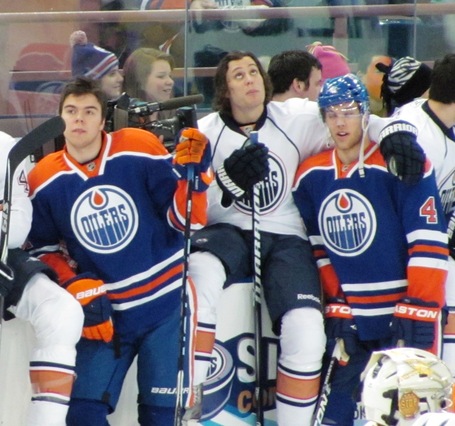 The man with the flow, Ryan Jones has signed on for another two years with the Edmonton Oilers. The Oilers have not released contract dollars, but word in twitterland and now TSN confirms is $3 million over the two years. This is another deal that may polarize fans. I feel this is a good signing, Jones had 18 goals and 7 assists last season, in his personal best year. It's not too long, and this is for a player that is good for Edmonton on and off of the ice. Jones jokingly tweeted that people should run out and get their #28 jerseys before they run out. I'm sure it was a surprise to Jones when the Sports Closet in Sherwood park said they will give any Jones followers 20% off a Jones jersey.

Jones is not the next Wayne Gretzky, he is not going to single handedly push the Oilers into the playoffs, but he will entertain fans and he will play a physical game. The first Oilers fight of the 2010 season was fought by Jones.