Going into high-traffic areas is beginning to take it's toll on Ales Hemsky.  He suffered two significant injuries last season and finished the year on the IR again.  Each of his last two seasons have been impacted by injuries with Hemsky playing a combined 69 games since 2008-2009.  When he was healthy, he was excellent and though consistently playing the toughs for Tom Renney - he broke even on the chances sheet. 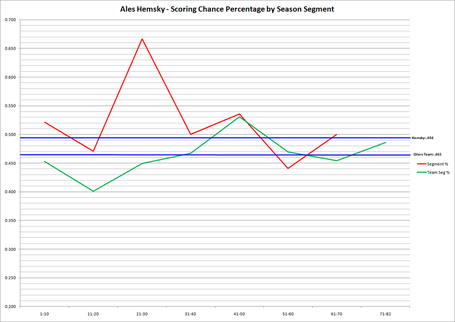 The major peak came on only 9 total chances.  His season was cut short by injury.

1.  Hemsky and his normal running mate, Shawn Horcoff, struggled mightily.  Without Horcoff, Hemsky was .530, mostly with Penner and Gagner against the toughs.

2.  Hemsky and Theo Peckham didn't fit very well together.  With Peckham, Hemsky's chance percentage was .373.  Without him, he was .546.