Tales From the Road: Glendale

Share All sharing options for: Tales From the Road: Glendale

The Phoenix Coyotes were under scrutiny and experiencing financial difficulties going into the game February 8th, 2010, and of course, not much has changed. I was excited that they were preparing themselves for the 2010 NHL playoffs and was anticipating a different crowd from what I would normally see on television. The Phoenix Coyotes are struggling to complete the sale to a new owner and secure financing. The commissioner Gary Bettman is of course attempting to keep the team in Phoenix, no matter what. It is an important marked in terms of television contracts, so in some ways it makes sense for Bettman to be so concerned with the team remaining. For hockey fans, we remain frustrated hearing the dollars lost every season and just how cheaply tickets can be had for. There have been some interesting ticket selling ideas including free tickets with the purchase of vodka.

Otherwise, the cities of Phoenix and Glendale are gorgeous, warm, and look strangely like Los Angeles with all of the imported palm trees and not as much like the desert that I was expecting. The highways are luxuriously smooth for a girl from Alberta and it was a beautiful warm sunny day by the pool, perfect weather for a hockey game.

The Jobing.com arena is fairly new (built in 2002) and it shows. Indeed the complex around the arena featuring restaurants, dining, fountains and many lights make this a destination for an evening out rather than just a game. It is too bad that it feels so far away from anything else. This complex is like an entity unto itself, but it feels like an oasis in the dessert unlike the arena complex in Los Angeles which is in the middle of downtown. This complex is a long cab ride from downtown Phoenix.

There were plenty of walk-up tickets available for the game against the Edmonton Oilers, but the fans of the Phoenix Coyotes had still come out in droves and the arena didn't look like what I have seen on television in prior match-ups. Many in the crowd were on vacation and delighted at the prospect of catching a game for an extremely reasonable price, some were retired snowbirds from Canada and always go to games to cheer for a Canadian team and some were like me, seeing a game in Phoenix on their way to another destination. No matter the reason there were a large number of fans in the stands and the atmosphere was exciting.

Well, exciting unless you were an Edmonton Oilers fan. In case the pain from this season has made you forgetful, the Oilers did not end the season well last year either. 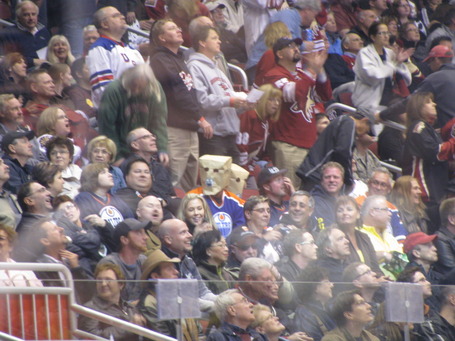 The scoreboard is new and shiny, another reminder that the Oilers might be falling behind in terms of aesthetics in Rexall Place. The ceiling is high, the seats are comfortable. I hate to add in another comment suggesting that the seats aren't ageing as quickly as they would in other arenas due to lack of use... but it's true. 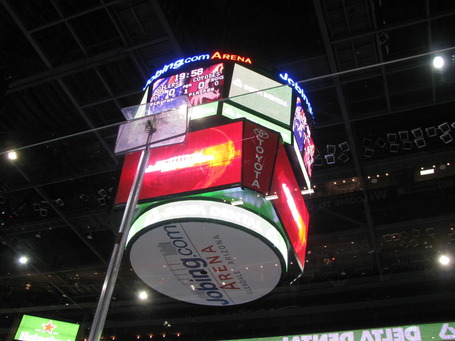 This was a game where Bryan Pitton played backup to Jeff Deslauriers and Devan Dubnyk was reassigned to Springfield. Nikolai Khabibulin was of course out and recovering from back surgery. It was after this game that Khabibulin was pulled over for speeding in his Ferrari. I was at the arena, and we were also staying in Scottsdale. Had I known Khabibulin was in need of a driver for his car, or needed a ride I would have been more than happy to help him out. As I watched both teams warm-up I tried to pay particular attention to the ice, to see if the climate in Arizona made a big difference. Although it was only February, we had spent the afternoon sitting by the pool, not Alberta weather at all. The ice didn't appear to suffer greatly, but I'm sure the players would be the experts. 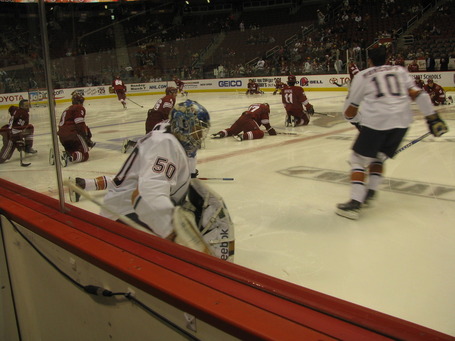 The Oilers lost this game, and not by a small margin. The final score was 6-1 Coyotes. I was wishing I had a paper bag by the end of this game. I want to say that the loss didn't take away from my enjoyment of the trip and the arena, but it did. 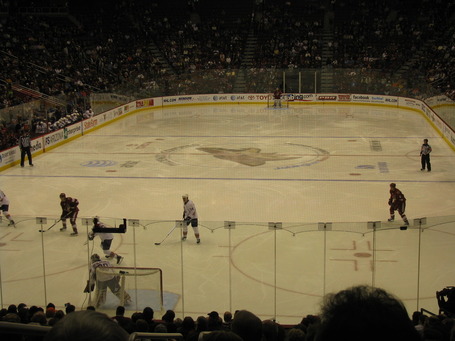 The Jobing.com arena complex made me jealous. My photos of the fountains and restaurants didn't quite turn out, I should have taken photos before the game, not after leaving the arena. It was almost as if the complex was it's own little town just off the freeway. The lights, hotels, parking, restaurants and bars reminded me of being asked by visitors to Edmonton if they could get something to eat near Rexall before the game. The gas station convenience store doesn't quite cut it.

I don't want to comment too much on whether or not I think that hockey in Phoenix is working, it's a touchy subject. There are passionate fans there, but there are also passionate NHL fans in London, England. The end of the story for the Phoenix Coyotes is not yet written, and it appears as though the Jets are not moving home to Winnipeg, but rather the Atlanta Thrashers. If Winnipeg gets a team, I can't help but wonder if this will mean less support for the Yotes, some people follow the team due to nostalgia.

If you are in Phoenix for a convention golfing, or visiting your parents or grandparents, go to a game while you can. The situation is unstable and you never know how long that will last.