The Bruins finally put together a game they should've won handily.  They dominated possession and shots, but settled for long-distance stuff in the first and Tampa simply packed it in and blocked shots.  Julien seemed to figure this out in the second and third and the Bruins owned the game.

The shots differential didn't really tell the story of the first period.  The Bruins were settling for perimeter shots and the Lightning kept blocking them down.

Essentially, everyone on this team decided to have their worst game of the series except for ... Marc-Andre Bergeron.  Before seeing the numbers I noted that Gagne was invisible for much of the game and made zero impact.

It took them seven games, but Krejci's line finally played like a top line and won the battle.  For as much as Versus talked about Peverley, he was beaten pretty soundly on the chances chart.

Chara and Seidenberg had their best game of the series which coincided with Tampa's worst game.  I'm not sure which one drove the numbers. 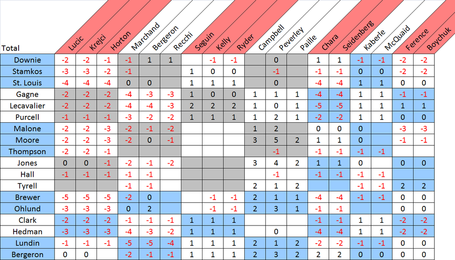