Share All sharing options for: Weight Memories Remind Fans What Oilers Are Missing

Including this year, Doug Weight may just possibly be the ex-Oiler that fans wished could be brought back, most often. As Bruce looked back at the career that was for Dougie Weight, we as Oilers fans get the opportunity to look back and remember when you truly believed in players, and when the agony of a low Canadian dollar met threat of your favourite player being traded to keep your favourite Canadian team afloat. With the last memories of Weight as an Oiler being positive, it never surprised me to hear or read fans say that Weight would be a great player to bring back, to mentor the youth and to add some spark to the line-up. The reality of course is that Weight has been slowly ageing as all players eventually do, and any return to the Oilers wouldn't have been as sweet. Could you imagine turning on Weight the way fans did on Jason Smith or Ethan Moreau? As much as Oilers fans love their grizzled vets, how many of you scream at your televisions over plays by Jason Strudwick? That's right, even just from the comments here, it seems to be a large number of fans.

Weight very well may be the most prolific and well loved post dynasty Oiler the other possibility for most fans is of course Ryan Smyth. This is of course despite the fact that Weight was a member of the 2006 Stanley Cup winning Carolina Hurricanes. It is still with some sadness that fans see him walk away from the game, announcing his retirement on Thursday May 26th, to work as an assistant coach and as an assistant to the GM with the New York Islanders.

Weight was many things to Oilers fans including the last legitimate 1st line centre the team has had, and the last Oiler to score 100 points in a season. These are not easy tasks or labels for any player, but are sorely missed by the two time 30th place NHL team. Some members of the media feel that for this reason, the Oilers need to seriously consider and go after a potential first line centre at this year's draft.

While a member of the Oilers, Weight was present in so many Oilers memories. The first goal scored by Smyth was made possible by, and celebrated with who other than Weight. 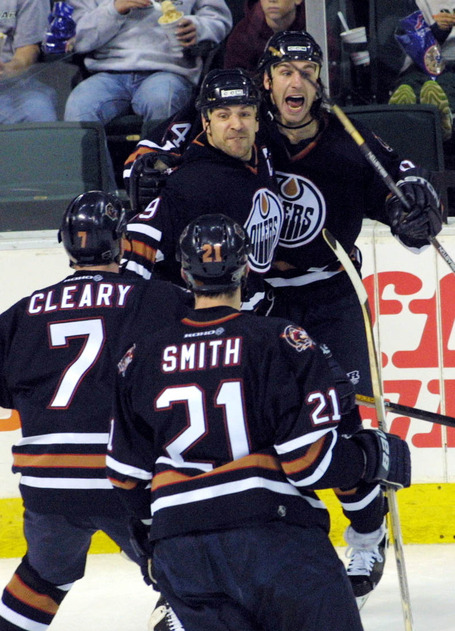 Weight was also a player who was key to the playoff series the Oilers played in through the 90s. Yes, most of us remember the 2000s more than the 90s so may have forgotten that the Oilers did make the playoffs from time to time in the past. They would also occasionally win a series or two, it made winters and springs in Alberta a little easier to live through.

Weight was proud to be an Oiler, even if it involved publicly embarrassing himself. I doubt Weight ever saw Youtube coming at the time.

Fighting back tears, Weight expressed his excitement at beginning the next chapter of his life, and reflected on his time in Edmonton with the Oilers. On playing with the Oilers,  Weight remarked "I realized what it meant to me and what I learned there. It was the best hockey I've ever played and the most I'd ever been challenged. Everything you want is in a city like Edmonton, what a place to live." While these words are encouraging to hear when you look at who they are coming from, you know that Weight is referring more to the experience of playing hockey he had at the time. The perception of the Oilers organisation is sadly and drastically different today. These were none the less tear inducing words for many an Oiler fan out there. Of all of the players that have come and gone from the Oilers club, why did a guy like Weight have to be one of the ones that left.

We all wish Weight and his family the best. Perhaps one day Weight may return to the Oilers, as a GM or in a coaching capacity, after all coaches and GMs seem to move as often as players.