Up to this point, I've posted the raw chances numbers for each player without much editorializing or analysis outside of noting the consistent Ryan Jones Effect.  I've left the analysis to Bruce, Ryan and Scott.  The lack of editorial content will change with this article. 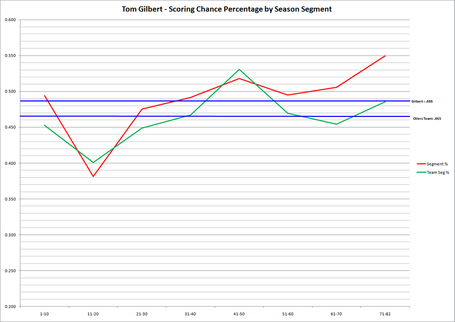 Gilbert rock-solid throughout the season except for games 11-20 and the beginning of the 21-30 segment.  That dip coincided with Tom Renney pairing Gilbert with Jason Strudwick to face the toughs.  It was a terrible decision.

14 of 19 players were better with Tom Gilbert than without and many significantly so.  The Taylor Hall - Shawn Horcoff - Jordan Eberle line is a glaring example of this.  Without Gilbert they were below 50%.  With him they were above 55%.  Theo Peckham was somewhat respectable with Gilbert, but without him, Peckham was below replacement-level.  Gilbert even helped Ladislav Smid rise above 50% in their time together, but without Gilbert, Laco drops to .446.

I've written about the selective perception of Oilers' fans when it comes to Tom Gilbert and since then the vitriol has increased.  There is a rather vocal portion of the Oilers' fanbase that deems Gilbert to be a terrible defender (because they don't understand defense), a wimpy player (presumably because they've never seen shot block totals) a salary cap anchor (because they don't understand value) and a detestable person (because he writes about his personal life for the Oilers' official site).  If you, the reader, believe any of the above about Gilbert, you are ignorant to the facts, purposefully obtuse or you are an imbecile.