Game five was all about Tim Thomas. He gave the Bruins a series lead by standing on his head and other various body parts. Game six was supposed to be about Dwayne Roloson and his elimination games record. Instead, game six was about terrible goaltending from Roloson and poor goaltending from Thomas. Roloson needed five goals for to continue his streak (what a clutch performance?) and Thomas couldn't come up with any of his Flying Wallendas saves. After watching game two, I said:

To win this series, the Boston Bruins are going to need Tim Thomas to stand on his head, a huge power play opportunity advantage, Tyler Seguin's line to score on 80% of their shots on goal and a nightly Dwayne Roloson collapse. Tampa Bay is a vastly superior team in every area except in goal and at even strength, this series has yet to be close.

In game six, Thomas was weak, despite referee Eric Furlatt's best efforts, the power play opportunities were close and the Bruins saw David Krejci's line scored on 4 of their 10 total scoring chances. Tampa's domination at even strength continued and the power play found some life. Meanwhile, if Tampa wants a shot in game seven with Roloson in goal, they may need to score more than 5 goals in Boston.

Boston came out as strong as I've seen them in any period thus far but turned around and gave it all back in the second and gave more back in the third.

Our journey through The Twilight Zone continues.  Marc-Andre Bergeron was +7 at even strength and Tampa surrendered no chances against with him on the ice.  That brings his series totals to +25 (30 CF - 5 CA).  Dwayne Roloson is struggling and Bergeron is flourishing.  It makes me think Roloson is going to run over Bergeron and knock him out of game seven.  The other remarkable number on the chances board was posted by Steve Downie, who was +8 with zero chances against at even strength.

The story for Boston was Zdeno Chara.  He was absolutely worked by Martin St. Louis and Steven Stamkos and to a lesser extent Downie.  Krejci's line finally scored some goals, but they are still losing the battle at even strength. 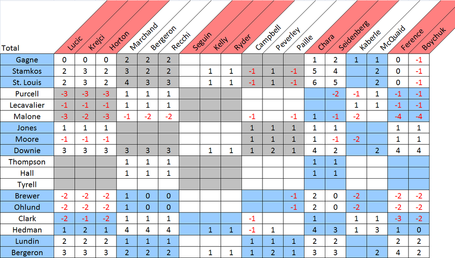 Tampa actually started with Ryan Malone flanking Stamkos and St. Louis, but in the first period, Guy Boucher flipped Malone and Simon Gagne.  Malone is the one top forward still struggling for the Lightning and in the series totals, I wouldn't be surprised to see Malone in front of only the fourth liners in chance differential.  Note Chara's column - he beat no one.  Note Bergeron's row - he beat everyone.