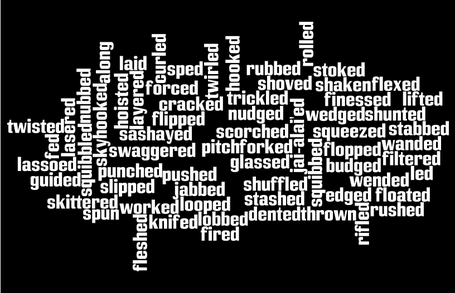 I occasionally watch New Jersey Devils' games on Center Ice.  The games are broadcast on MSG Network and feature a near-cartoonish cast of characters doing different types of analysis from three or four different locations in the arena.  Some of it is insane, like Ken Danyeko's "If I were playing in this one, I would have just punched him in the face...", some of it hilarious, like Chico Resch's "Ooooooooooohhhhhhhhhhhhhhhhhhhhhhhhhhhh, I was wrong, Zach didn't shoot that one, look at that, he meant to pass it to Andy and it just went IN!  Look at that, huh?" but at least Doc Emrick was a reliable play-by-play guy in that he was on top of the play.  Sure he uses "DRIVE" for shot at nearly every opportunity, but he knew player names and was able to express the pace of the game through his cadence.

It must be because of the sheer number of games he's now calling for versus, but I, along with nearly everyone else, have noticed how far Emrick reaches into his thesaurus to call the game.  Some of them are meaningful, most of them meaningless and some of them are just plain confusing.  Today, with the help of some followers on Twitter, I bring you a list of words used by Doc Emrick in place of "passed" or "shot":