Tim Thomas is quite the luxury.  This Boston Bruins team isn't like the 1999 Buffalo Sabres who didn't have much offensive talent and chose to pack it in around Dominik Hasek, rather, these Bruins seem to forget about their defensive responsibilities for periods at a time and lean on Thomas to constantly bail them out.  The Tampa Bay Lightning have consistently carried the play throughout this season and the story continued last night.  Tampa owned the shot counts, the chance counts and possession in a huge way, but Thomas (and a post) kept the Bruins from going down 3-1 on the scoreboard and 3-2 in the series.

Tampa won each period at even strength and tied the third due to the power play chance from Boston.

I feel like we've slipped into some alternate universe.  Marc-Andre Bergeron leads the series in chance differential at +18 (23 CF - 5 CA).  He looks good to the eye, but the chances are just crazy.  His time has been well-managed by Guy Boucher and Bergeron is responding in a way I didn't think was even possible.

Pierre continues to laud Chara's play against Lecavalier, but in the end, I won't be surprised to see Chara taking the worst of that matchup.  Recchi and Marchand struggled against the top of Tampa's lineup. 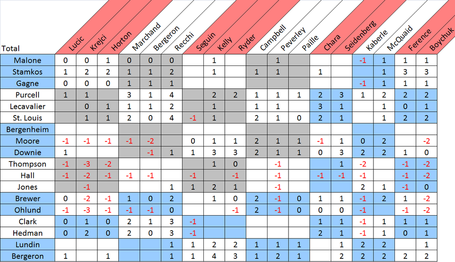 Krejci's line finally won a matchup, albeit against the bottom of the Tampa roster, but Bergeron's line turned around and lost to the top of Tampa's roster.  Marc-Andre Bergeron's line is something else.