It's now apparent to everyone that the most dangerous lead in hockey is 3-0.  After Dwayne Roloson gave up a run of soft goals, Tampa found themselves behind once again.  Fortunately for Tampa, Boston's defense continues to play the part of the patsy.  Own-zone coverage has been an issue for the entire series for the Boston defense and the only line they're getting help from is the Patrice Bergeron line.  Boston's "scoring line" has been terrible through four games -- including today's results, the Milan Lucic - David Krejci - Nathan Horton line's chance totals are 5-16, 5-20, 6-17 respectively.

The chances came in bursts, but in the end they evened out.  Roloson gave up a goal on a non-chance in the first and couldn't stop the puck on two of the other three chances against him in the period.  It was a deserving hook.

Lecavalier has struggled since Patrice Bergeron returned to the lineup, but he also lost Simon Gagne to the Stamkos line.  Marc-Andre Bergeron's minutes are being managed very carefully, but he's been very effective in the series thus far. 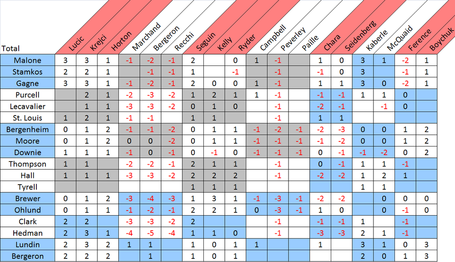