Gilbert Brule's 2010-2011 season was marred by a condition known by the entire Edmonton media, but reported by no one.  The condition prevented Brule from playing regularly and last year's Ryan Jones saw his game suffer as a result.  It was as if Brule spent the entire season on outpatient treatment and only made the games when his medical scheduled allowed it.  Brule's career now hangs in the balance, though someone is always willing to give former first-rounders a chance. 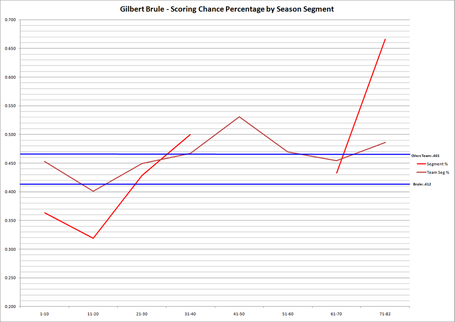 The size of the data sample is so small and disjointed, I don't know that we can draw additional conclusions.

Brule didn't accumulate enough chances to find many relevant trends.  One player was better off with Brule and that was Kurtis Foster.