Jeff Petry had a very interesting season with the Edmonton Oilers organization. He jumped right into a top four role at the AHL level, but seemed to struggle with a -6 rating and limited offense at EV in his first twelve games. As the season progressed, improvement wasn't coming quickly. In his next fourteen games the minuses slowed down, but he was still a -2, and earned just three more points. It looked very much like Petry was going to need a whole season down on the farm to improve his skills in order to compete for a roster spot on the 2011-12 Edmonton Oilers. And then he got called up to Edmonton.

As an Oiler, Petry was much better than I was expecting. By the scoring chances he was doing very well, but as with most rookies, there were still plenty of gaffes. Petry's errors /60 was only better than Jim Vandermeer among the regular defensemen, partially because he was making some mistakes that led to quality chances, and partially because he had the worst on-ice save percentage at evens among the regular defenders. When the goalie is making fewer saves for you then everyone else, your error rate is going to look pretty bad since those only get counted on goals. If looked bad enough to the Oilers that they briefly demoted him.

But after a week or so of Alex Plante (whose luck - and play - was even worse than Petry's), Petry was back up and back to helping the Oilers generate chances. Of course, his chance percentage is probably flattering. The sample size is small, and if we compare his chance percentage and Corsi percentage (which we know is the best proxy for zone time), we see a significant move down:

I've highlighted a few guys on the list who've move around significantly including Petry. He's still near the top of the list, but that's about where you'd expect him given the fact that he wasn't taking on the toughest competition (he was playing behind fellow right-handed defender Tom Gilbert), that as Bruce points out, his shots data was more heavily impacted by score effects, and that he had a very favorable zone start percentage. Let's take a closer look at those zone starts: 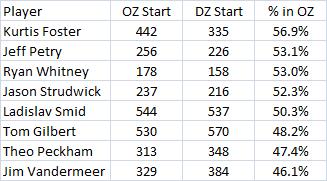 I think this chart is pretty revealing. Tom Gilbert and Theo Peckham get a nice boost for taking the tough starting positions (and for much of the season the tough minutes), and Jim Vandermeer gets a nice little bump as well. Petry and Whitney, meanwhile, are revealed as the guys getting the offensive minutes and to their credit, both guys took advantage. Oh, and Kurtis Foster is terrible.

So what does all this mean going forward? Well, if it were up to me, Petry would be playing on a somewhat sheltered third pairing alongside Ladislav Smid to start the year behind Ryan Whitney, Tom Gilbert and two shut-down guys that would be brought in over the summer. I don't think that's what the Oilers have in mind.

Projection: Petry is pushed into a top four role alongside Ryan Whitney, and those two get the offensive minutes and offensive teammates while Tom Gilbert gets one of the lesser defenders to take on the toughs. Petry puts up something in the neighborhood of 25 points and a single digit +/- number, and many folks think he's miles better than Gilbert. Those folks will be wrong.