It's no secret that Jeff Petry is one of my favorite prospects.  I was pretty sure that Petry would be an excellent professional defenseman, but his performance in 2010-2011 destroyed even my expectations.  To the eye, Petry was smooth and calm with the puck and had the ability to get the puck, and get the puck up ice like few other Oilers defensemen. 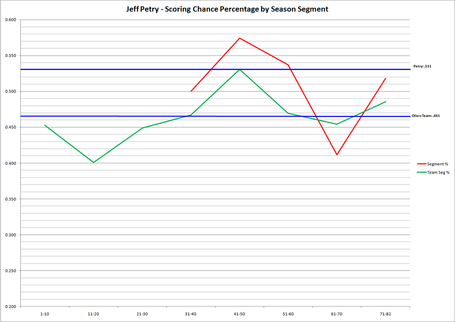 His one segment below the Oilers' segment average and below 50% was also his smallest sample size.  Though his overall season sample is small, there is consistency in his performance.  He was first in chance percentage and chance differential on the Oilers.

Petry is the anti-Peckham.  16 of 17 players were better with Petry than without, and even Jordan Eberle, the player better without, was .500 with Petry and .505 without.  Petry even managed to fend off the kryptonite of Ryan Jones and was one chance away from breaking even with Jones - a mini miracle.  His regular partners, Jim Vandermeer and Ladislav Smid were significantly better with Petry -- Smid looks like a world-beater at .523.

Again, the sample sizes are really small, and we don't have qualcomp, but it sure looks like Petry's puck-moving abilities make Taylor Hall and Ales Hemsky play on another level.