This is the boring hockey we expected from a 1-3-1 team against a trap team.  If not for Victor Hedman's HUA one minute into the game, this game may have lulled everyone to sleep.

Lecavalier's dominance disappeared and Tampa's even strength dominance went with it.  Boucher flipped St. Louis and Gagne for this one and I'm not sure why.  The Gagne - Lecavalier combination was highly effective in the first two games and not very effective tonight.  I think this was a matter of Boucher out-smarting himself.

The entire lineup got a boost from Bergeron's return and only Krejci's line struggled. 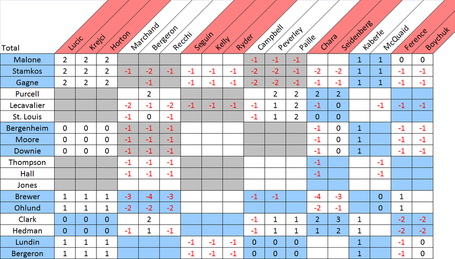