Share All sharing options for: CHL Relative +/- and NHL Success

We've got an awfully long way to go until the draft, but the debate about who to select with the first overall draft pick is already well underway. The clear-cut favorite at this time is Ryan Nugent-Hopkins of the Red Deer Rebels, but there five other CHL forwards consistently ranked in the draft's top group of players: Sean Couturier, Jonathan Huberdeau, Gabriel Landeskog, Ryan Nugent-Hopkins, and Ryan Strome. Despite Nugent-Hopkins' lead with the scouts, there has been some statistical analysis suggesting that some of these other forwards may actually be better. Even strength scoring is a popular one, but today I'm going to talk about "Relative +/-" because one of the young men listed above is having a pretty special season.

Sean Couturier is well in front of the pack by this measure, followed by Huberdeau and Landeskog, and then another gap down to Nugent-Hopkins and Strome. Of course, it's hard to know what this means without further context, and so I've taken the liberty of calculating the Relative +/- for each forward drafted in the first round from 1999 through 2006 (thanks to hockeydb.com for the data), sixty-two players in all: 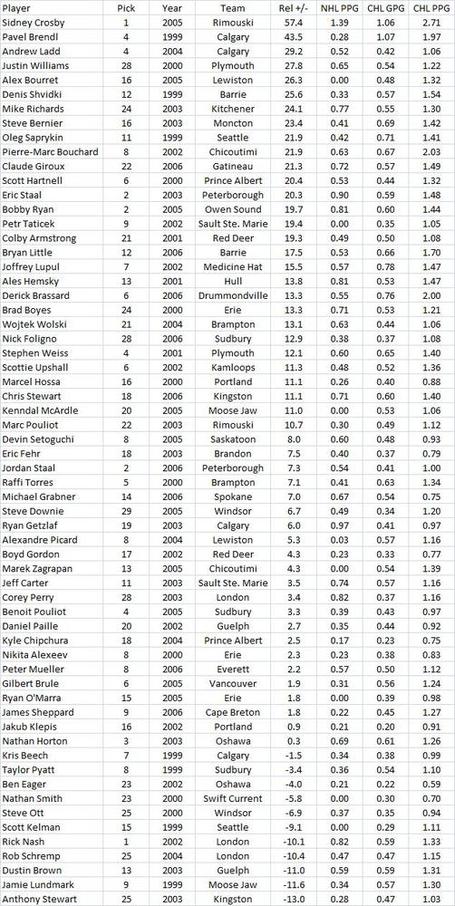 Sean Couturier slides nicely into third place here just behind New York Rangers' superstar Pavel Brendl. Okay, so it's not perfect. Along with Brendl, we have Alex Bourret, and Denis Shvidki up near the top (although they scored a lot too so it's not like this measure was alone in telling us that these guys were players) and a guy by the name of Rick Nash at the bottom who I hear is pretty good. So it's great that Couturier is third, and that Huberdeau and Landeskog are going to slide into the top twelve, but does this statistic actually tell us anything about how well these players will perform in the NHL? Well... a little bit. Here's the Relative +/- (for the regular season in a player's draft year) plotted against NHL points per game (career for regular season, any player without at least 50 NHL GP listed as having zero points per game): 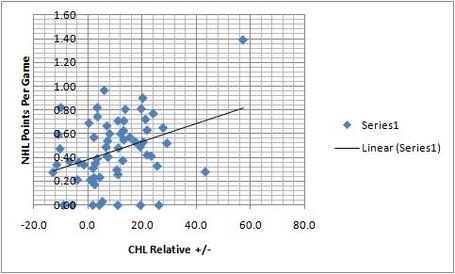 Sidney Crosby and Pavel Brendl both look ridiculous on that chart, and Ryan Getzlaf looks out of place too (he's the guy up at 1.00 points per game; as I went through these charts, I could see why he lasted as long as he did in the 2003 draft), but the takeaway for me is that these two variables have a mid-to-low positive correlation (Pearson's r = 0.36). Hooray! I didn't just collect a bunch of useless data! That result makes sense, of course, since both statistics point toward guys who are good at hockey. Still, it's good to see. My next question was, "Okay but how does this correlation compares with tracking goals or points?" Here are the results (for regular season CHL goals and points per game in the player's draft year): 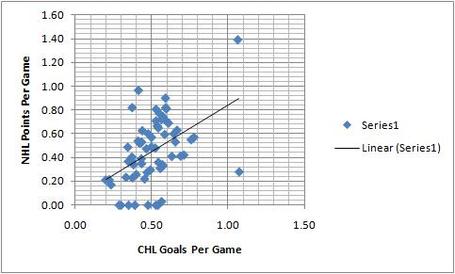 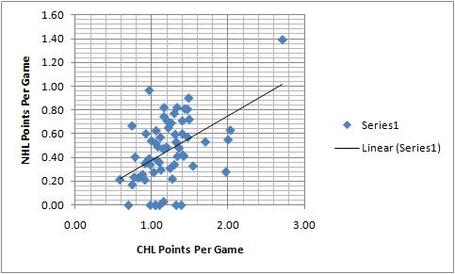 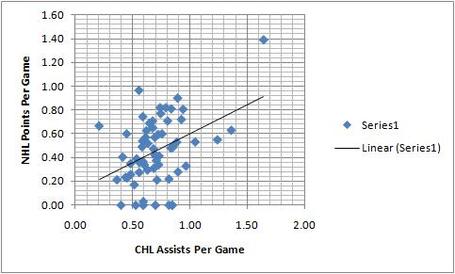 The relationship is weaker (Pearson's r = 0.40), which would seem to confirm the conventional wisdom that goals are more valuable than assists since they translate better to the NHL. In other words, if two players have close to the same number of points, but there's a wide discrepancy in the number of goals, the player with the higher number of goals is a bit more likely to work out.

So what does all of this mean for this year's draft? Well, we've seen that Relative +/- is of some use, which is another data point in favor of Sean Couturier. We've also seen that points per game is a more useful indicator, but that goals ought to trump assists. As such, based on the information I have right now, I'd tentatively list the top five forward picks as Couturier - Huberdeau - Strome - Nugent-Hopkins - Landeskog with Couturier and Huberdeau a step ahead of the other three.