To win this series, the Boston Bruins are going to need Tim Thomas to stand on his head, a huge power play opportunity advantage, Tyler Seguin's line to score on 80% of their shots on goal and a nightly Dwayne Roloson collapse.  Tampa Bay is a vastly superior team in every area except in goal and at even strength, this series has yet to be close.  It's only going to get more difficult in Tampa as Lightning coach Guy Boucher will get the final change.

The Bruins managed only 7 even strength chances in this one and it seemed like they scored on almost all of them.  It's not sustainable, but Tampa preventing chances has been thus far.

Through two games, Lecavalier's chance differential is now +11 and Hedman's is a ridiculous +14.  Ryan Malone has been Tampa's worst forward by the chances and he's even for the series.  Marc-Andre Bergeron's numbers are staggering, especially for an Oiler fan.

While Boychuk was -6, Chara was -4.  Chara's two-game total is now -9, second-worst among all Bruins, right after Seidenberg.  I hope this team buys Thomas a new house and a rolex for each day of the year. 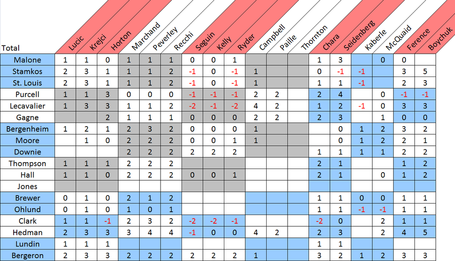 Seguin was the only Bruin to win the battle overall and his line was the only line to win any individual line battle.  Lecavalier was once against excellent, except against Seguin and Hedman and Bergeron were outstanding against everyone.