What a fantastic game by the Tampa Bay Lightning.  The Boston Bruins were on their heels from the opening faceoff and the Lightning never let up.  This wasn't a team winning games by perfectly executing a trap at center ice - the Lightning were a team that got the puck into the offensive zone with crisp backend play and kept it there for extended periods.  The Lightning weren't trying to lull anyone to sleep and counter-attack or choke the life out of the game and win it on special teams, they just dominated all facets of the game.  Guy Boucher pulled a fast one.  Or the Bruins were just overrun.

The Lightning slowed the pace as the game wore on, but they won the overall chance battle all three periods and only surrendered a single even strength chance to Boston in the third when the Bruins were "desperate".

I've read multiple people who have use Victor Hedman as Adam Larsson's best comparable.  If this is the case, Larsson should be #1 in this draft without a question.  What a beauty of a game by the young Swede.  That Lecavalier fellow had a decent game too, eh?

While Boston fans and the media focus on Patrice Bergeron, he won't matter unless Chara and Seidenberg play significantly better hockey. 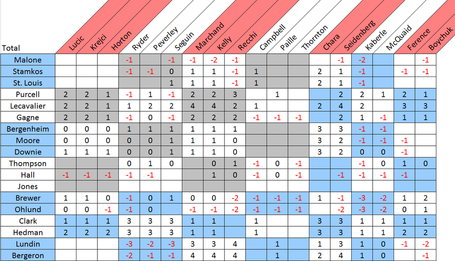 Lecavalier did damage against everyone Boston could put out against him and the Clark-Hedman pairing was excellent.