One thing that I've meant to put out there for a while now is the final standings by Clear Victories. It's already on the sidebar, but I thought it might be interesting to talk about a little bit too. To refresh, there's almost no correlation from season-to-season in a team's ability to win one-goal games, which means that a team winning a disproportionate number of games by a single goal has probably been pretty lucky over the course of a season. After the jump, we'll take a look at how teams did in the regular season in games decided by two goals or more (excluding games that from one to a two or three goal margin because of empty-netters).

First, let's take a look at the Eastern Conference: 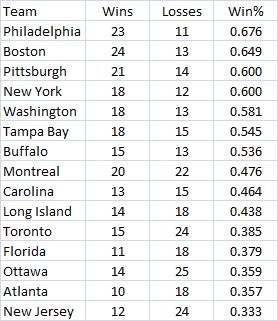 The eight best teams by this measure were the eight teams that made the playoffs, so no one in the East got "screwed" because of too many losses in one-goal games. Other interesting notes here include the fact that there was some reason to believe that Washington wasn't the elite team that their number one seed suggested, and that New Jersey's dominant run to end the year didn't include a lot of games decided by more than one goal (they were 2-11 on December 5th, which means that they went 10-13 from that point on, which still isn't very good).

Now a look at the West: 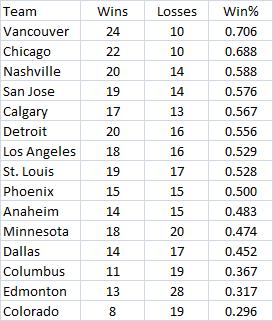 The story here is a little bit different with regard to one team getting the stinky end of the stick: the Calgary Flames look like a pretty good team here. At the end of the season, they were almost certainly better than the Coyotes, Ducks, or Kopitar-less Kings. They may not have won a round once they got there, but their absence was a great thing for all of the first-round favorites... except Vancouver. The Canucks drew the second-best team in the NHL by this measure in the first round. It's really too bad that that Game Seven didn't work out differently. As for the Oilers, I'm reminded of a Dustin Penner quote that Tyler brought out a while back talking about their record in one-goal games as a reason for optimism. Tyler (rightly) pointed out that this was not, in fact, a reason for optimism, and that hasn't changed at year's end. Edmonton's record in one-goal games decided in regulation was 8-17, good for a .320 winning percentage, which is pretty much exactly how they performed in games decided by more than one goal. As it turns out, they were just bad (breaking news, I know).

Now let's take a look at the Division Standings:

The Central Division is sitting on top of the pile, and there's really no surprise there. Three of the top six, and four of the top eight teams in the Western Conference were in the Central division, with the only really poor team being Columbus (which was done in mostly by goaltending for the second straight year). There also seems to be a pretty clear divide between the three best and the three worst divisions, with two of the best ones out West, and the Northeast bringing up the rear despite sending three teams to the playoffs. The only other Western division is the Northwest, and if you take out the Canucks, they look really, really terrible. Here are the standings again minus the first-place team from each division:

That gap between the top three and bottom three remains, but the Northwest sinks all the way to the very bottom. Vancouver sure does travel a lot, and if the Thrashers move to Winnipeg, there's no doubt in my mind that Vancouver should be moving west into the Pacific (no self interest there at all!), but they'll probably miss the easy schedule - the Oilers, Avalanche, and Wild won't be approaching elite any time soon, and the Flames may well be on the downswing. That sounds a whole lot more appealing to me than facing off against the Sharks, Kings, Ducks, and Coyotes for a division crown.