Zack Stortini had a rough year, one which might be his last as an Edmonton Oiler.  Throughout his young career, Stortini's underlying numbers have always been better than expected and my colleague Bruce was the first person to defend Stortini's on-ice performance.  This year, however, Stortini's numbers fell apart and he ended the season in Oklahoma City.  There's a very good chance he will not be back next season and that's a tough break, especially if he's replaced by a full-on goon. 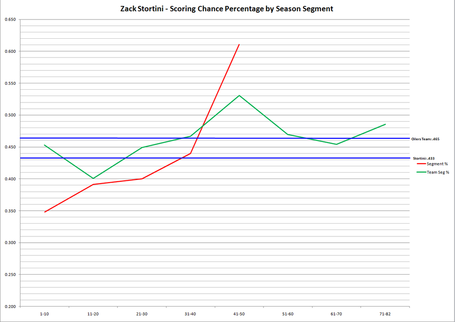 Stortini was demoted in the middle of his best ten games of the season.

What are the odds the Ryan Jones effect ended Stortini's Edmonton career?