This was a wonderful series to watch.  While the three other series were lop-sided affairs with few competitive moments, this was a show.  Behind The Net put it best:

*4v4 chances do do not count as even strength time on ice. See here for an explanation.
The Sharks won the overall chances battle by dominating on the power play.  They nearly doubled the Red Wings chances on the power play 39-20.  The Wings edged the Sharks at even strength 90-84, a difference of six chances in seven games, numbers that reflect how close the series was.

Some of the numbers above should be a surprise for most people.  The Sharks' top pairing of Douglas Murray and Dan Boyle struggled against Detroit's top players, but the rest of defensive corps held their own against the rest of the Wings' roster.  The forwards were relatively close throughout the lineup, with the lone exception being Torrey Mitchell's -7, the largest negative chance differential among the regular forwards.  Of note is Patrick Marleau's +5, second among forwards after Devin Setoguchi.

Except for Dany Heatley, the top two lines were in the black.  The bottom of the roster didn't look good and I wonder how unbeatable the Sharks would look if they had useful bottom-line players rather than a couple of brawlers and a faceoff specialist.

I still believe these numbers would look much better had Todd McClellan replaced Clowe with Ferriero in game six and used Pavelski as the second line.  San Jose was beaten up on the chances board in game six and didn't have an effective line.  Keeping Thornton's line and Pavelski's line together would have been the more effective strategy.

Pavel Datsyuk was stellar all series long, that's not a secret.  But Johan Franzen's numbers are excellent, even though he was hurting badly.  Given his numbers while injuried, how different is this series with a healthy mule?  Tomas Holmstrom is noticeably slowing and doesn't keep up with the play much anymore, even though he's out with either Datsyuk or Zetterberg or both. 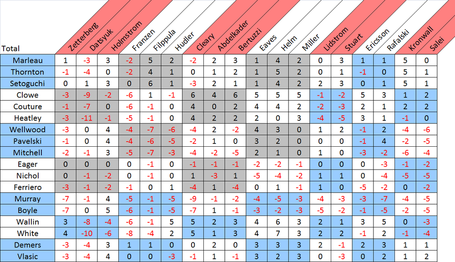 How even was the series?  Add the numbers in the top left box together and we have...zero.  The two top lines (lineup as of the opening of the series) played each other to a draw.

The Red Wings held the advantage at the top of the roster, but the Sharks made it back by beating the bottom of the roster. 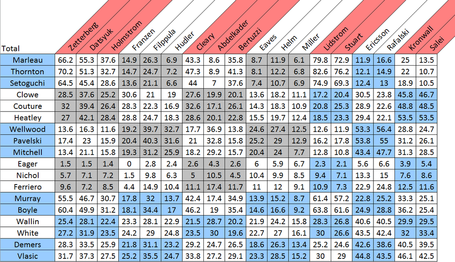 The most astonishing thing on this chart is the toughness of minutes played by Lidstrom and Stuart.  65% of Lidstrom's minutes at even strength came against Thornton.  82% of his minutes were against either Thornton or Couture.  In recapping last year's Sharks-Wings series, I wrote:

Nicklas Lidstrom's minutes were amazing during this series.  89% of his minutes at even strength game against Thornton or Pavelski.

Lidstrom isn't slowing down - the Sharks forward compmliment is deeper this season and Lidstrom had to spend some time against Pavelski.

The minutes Demers and Vlasic played against Zetterberg and Datsyuk are also surprising - they were the secondary shutdown pair - not Wallin and White. 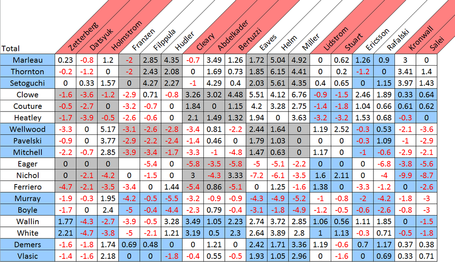