Ryane Clowe comes back and although he wasn't driving the play, he balanced the rest of the lineup. At about the 18:00 minute mark of the first period, Pierre mentioned how comfortable Mike Babcock was seeing Joe Thornton against Pavel Datsyuk, yet at home, Babcock was chasing any Datsyuk matchup that didn't involve Thornton. This game looked like the other home games - the Sharks were winning at even strength.

San Jose's top line was the best line in the game.  When McClellan can get that matchup - San Jose can beat anyone in the league.  Vlasic played an impressive amount of even strength time in this one - the most among all San Jose skaters and though he looked rough from time to time, he didn't lose the overall battle.

The Sharks went 22-10 overall and Dan Boyle was 12-4.  He played a beauty of a game in both ends, a game that reminded me of Chris Pronger during Edmonton's run in '06.

Brian Rafalski and Niklas Kronwall had very rough evenings.  The Versus broadcast team mentioned the notion of Kronwall replacing Lidstrom as the tough minutes defenseman which no doubt produced laughter all over the continent. 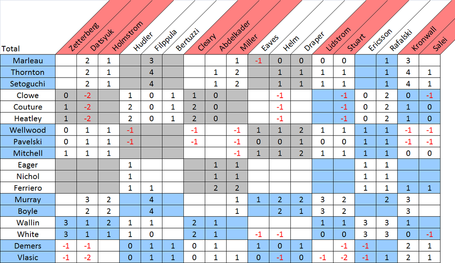 Boyle and Murray don't have a red value in any of their matchups.  Boyle's play in this game was amazing.  Torrey Mitchell also had an outstanding, though understated game.  He was extremely effective against the Datsyuk line.