Share All sharing options for: Canucks and Predators - Series Review

This series was nowhere near as close as Vancouver's first round series against Chicago, either in terms of my general impression, or a more rigorous look at the scoring chance totals. Shea Weber and Ryan Suter are great defensemen, and I didn't think that they were poor in this series, but the Predators don't have any elite forward talent, and as such, those two superstar defenders were washed away by the tide of suck in front of them. Vancouver's top two lines buried Nashville territorially, and Ryan Kesler cleaned up on the scoreboard, particularly in the last four games when he was easily the best player on the ice. Whereas Chicago could take advantage of the matching game when on home ice, Nashville didn't have anyone who could effectively match either of Vancouver's top two lines up front, which is why they lost all three games on home ice, and ultimately, the series.

I'll start by giving the links to each game in case you want to be reminded of any particular contest when looking at the totals for the series. After that, we'll take a look at how the teams did by period, and how the individual skaters performed. For those who'd like a definition: a scoring chance is defined as a clear play directed toward the opposing net from a dangerous scoring area - loosely defined as the top of the circle in and inside the faceoff dots, though sometimes slightly more generous than that depending on the amount of immediately-preceding puck movement or screens in front of the net.  Blocked shots are generally not included but missed shots are.  A player is awarded a scoring chance anytime he is on the ice and someone from either team has a chance to score.  He is awarded a "chance for" if someone on his team has a chance to score and a "chance against" if the opposing team has a chance to score.  And, of course, a big thanks to Vic Ferrari for making the whole damn thing possible with his awesome script.

The Predators were outclassed at even strength in every period of this series. Nashville kept things closest in the first on the strength of good starts in Game Two and Game Six, but they weren't able to sustain that advantage in either case. The most surprising thing to me in this chart is how close the teams look on special teams, partially because the Canucks outscored Nashville 5-3 in those situations (including just one goal for Nashville's power play), and partially because I thought Nashville looked dreadful with the man advantage. So why were things so close? Ice time. Nashville had about eight and half more minutes of power play time (about thirty-eight minutes to twenty-nine and a half minutes), including some time with a two-man advantage, and yet they weren't able to convert that extra time into more goals. A single goal in thirty-eight minutes on the power play is just plain bad, and it's made even worse once you add in the fact that they didn't even outscore their opposition in that period of time. Considering how badly the Predators' were likely going to be outplayed at evens, they really needed more from their power play, and they just didn't get it. 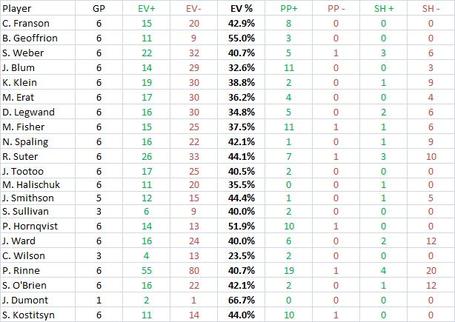 There's a whole lot of ugly finding its way into this chart, and things don't look much different if we look at Corsi numbers instead. The Predators were getting mauled both in terms of quantity and in terms of quality, with virtually no one immune. The lone exception would seem to be the fourth line, as both Patric Hornqvist - who was demoted to the fourth line at evens for much of the series - and Blake Geoffrion were able to post positive results. But the key forwards tasked with shutting down Vancouver's big guns didn't come close to meeting that goal. Nashville's best defenseman by this metric was Ryan Suter, and he didn't even crack 45% - this was a thorough team-wide beat-down. 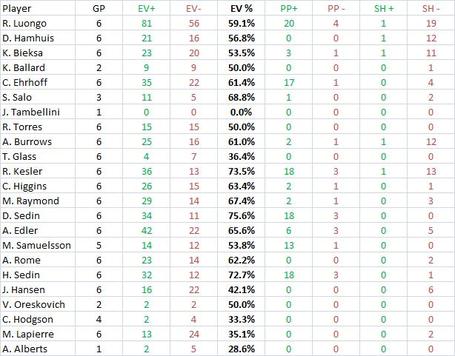 The forward numbers really jump out to me here. Ryan Kesler really was dominant, but so were Daniel and Henrik Sedin. The Sedins haven't been able to finish, and they certainly haven't been able to count on a save from their goaltender - the EV Sv% behind Henrik is .855, and for Daniel it's .844 - which has caused some folks to dump on their performance so far, but not much has changed from what they've been doing all year. I get that they need to finish more of their chances, but given the strong underlying numbers, the results should soon follow. This is (or should be) very encouraging for Vancouver fans heading into the next round. On the other side of the equation, the third line (Jannik Hansen and Maxim Lapierre are the constants) got trounced. I know that they're taking on a lot of own-zone draws, but there's a good chance that they'll continue to lose that matchup badly going forward, and both Detroit and San Jose have the high-end talent to compete with Kesler and the Sedins in the next round. Things are going to be much tougher in the next round.