Crafty coaching and some unexpected bottom line play allowed the Red Wings to dominate the Sharks throughout.  Todd McClellan is going to second-guess his choices in this one for a long time.

For the second game in a row, Patrick Marleau was the team's best forward by the chances and Benn Ferriero was the worst.  Douglas Murray and Dan Boyle struggled something fierce in this one, Murray going -6 and Boyle -5.  Boyle also made the completely boneheaded move of trying a point shot through a player just as a power play expired.

For the second game in a row, Ruslan Salei was Detroit's top defenseman by the chance count. 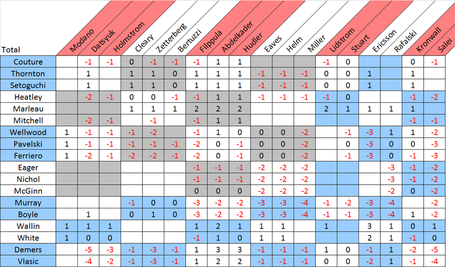 Mike Babcock won the coaching battle in this one.  He was able to get Datsyuk and Zetterberg out against Demers and Vlasic and his bottom two lines helped him out by beating the daylights out of Murray and Boyle.

Todd McClellan overthought this one.  Rather than promote one player into Ryane Clowe's left wing spot on Logan Couture's line, leaving the very effective Thornton and Pavelski lines together, he shuffled everyone  and ended up without a single effective line.  In fact, the only forward to make an impact was Marleau.