What explanations can we explore to determine why the Oilers are giving up far more chances in front of Khabibulin compared to anyone else who plays in goal for them?

I asked that question of you, the reader, in mid-March.  Commenters arrived at a "rebounds" consensus, but I don't believe anyone has done any work on the question.  I don't know if goaltenders have a significant effect on scoring chance rates, but we needed a way to introduce the Nikolai Khabibulin review, so the season numbers are after the jump.

I've listed his rank among his teammates as if he were a skater: 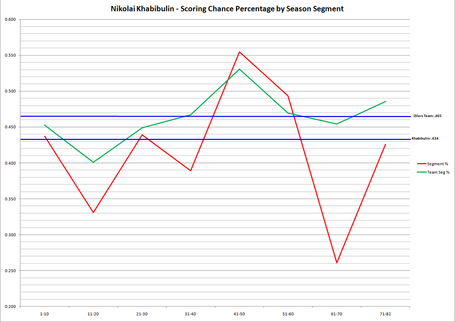 He was 20th in chance percentage so the poor numbers on the graph are not a surprise.