Share All sharing options for: CHL Update - The Best Player Available Is...

It is somewhat sad that for the second year running, Edmonton Oilers' fans are in a debating who to pick 1st overall in the upcoming draft. Last season it was Taylor Hall versus Tyler Seguin, but this season things are not as clearcut. There are four prospects who are legitimate contenders for the first overall selection and a few others who are solid contenders for picks 3-5.  I think by now almost all Oiler fans are familiar with Sean Couturier, Ryan Nugent-Hopkins, Adam Larsson, and Gabriel Landeskog. What we are not sure about is which player is the right one to pick 1st overall.

One point that often comes up in almost any discussion with respect to the draft is the 'pick the best player available' argument. It is nearly universally accepted that a team must always choose the best available prospect in the draft. However, what decides who really is the best available prospect? Is he the big center who has been dominating his junior league for a couple of seasons, or is it the center who has taken big strides in his development every year? What about that defenseman who is logging upwards of 24 minutes a game in playoff series in the SEL? Many times, it is not easy to ascertain who the best player is and this is definitely one of those drafts. Let us then try to make some headway in this regard.

After the jump, I will compare these prospects: we have the regular season and playoff totals of the top CHL prospects for this year's draft and can compare those to the seasons put up by Taylor Hall and Tyler Seguin one year ago. 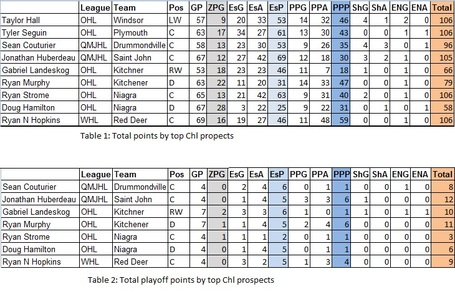 One thing I want to say before we talk about the draft eligible players is that had I done this last season, I would probably have been in team Hall rather than team Seguin - primarily due to him having very low zero point games, which shows his consistency.

Larsson had some up-and-down performances in international tournaments, but saved some of his best for the World Jr. Championship. He showed off his powerful stride and ability to move well laterally, and was especially good at moving the puck and making outlet passes. Larsson is a smart guy who sees the ice well and has a high panic point, meaning he'll hold onto the puck until the last possible second for his teammates to get open, meaning he often takes a good amount of hits over the course of a game and season. He also has a booming shot and can score his share of them from the point.

Finally, my rankings with strengths and cons:

Tomorrow we will focus on the rest of the players and and try to get a better ranking of the defensemen in the draft.