"No fancy schmancy passing
no dipsy doodle dancing..."
--The Hanson Brothers, "My Game"

Linus Omark came to Edmonton with a reputation for dazzling shootout goals and a bravado unrivaled in Sweden or Russia. But it was his passing ability and amazing board work that impressed fans the most. Tom Renney believes his game still needs work, but there's no reason for Omark to ever see the AHL again. 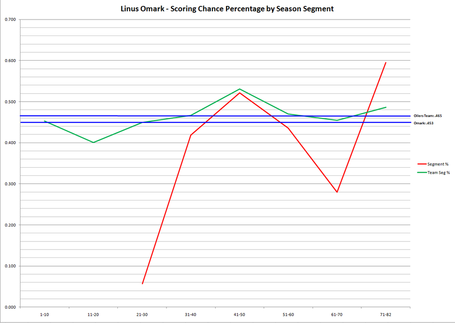 The late season narrative involving Omark centered around how much better he was skating with Magnus Paajarvi and how much better Paajarvi was when skating with Omark. I hate narratives because... oh, will you look at that? Omark and Paajarvi were 1 chance short of even when playing together. Find these guys a center capable of playing all zones and the Oilers might have something here.