Share All sharing options for: Canucks and Hawks - Series Review

It seems to me that we should all be willing to give a big thank-you to the Minnesota Wild for letting us enjoy a wonderful series. A lot of people came into this series thinking that the Canucks should roll over the Blackhawks (I know because I rode the Skytrain with a bunch of them), which obviously didn't prove to be the case. Of course, I picked the Blackhawks to win, and that didn't happen either, much to my chagrin. Unless you live here, you really don't understand the level of angst that was in the air, although that "better than the Olympics" celebration after Game Seven should give an indication. I had the Canucks controlling play in four of seven games, so they earned this win, but there's not a lot seperating these two teams.

I'll start by giving the links to each game in case you want to be reminded of any particular contest when looking at the totals for the series. After that, we'll take a look at how the teams did by period, and how the individual skaters performed. For those who'd like a definition: a scoring chance is defined as a clear play directed toward the opposing net from a dangerous scoring area - loosely defined as the top of the circle in and inside the faceoff dots, though sometimes slightly more generous than that depending on the amount of immediately-preceding puck movement or screens in front of the net.  Blocked shots are generally not included but missed shots are.  A player is awarded a scoring chance anytime he is on the ice and someone from either team has a chance to score.  He is awarded a "chance for" if someone on his team has a chance to score and a "chance against" if the opposing team has a chance to score.  And, of course, a big thanks to Vic Ferrari for making the whole damn thing possible with his awesome script.

The numbers are awfully close, though in a series that included two big blowouts, it's hard to know whether or not these chances are really representative of who carried the play. Still, those numbers in the third period really stand out. Over the course of seven games, Vancouver put the boots to Chicago late in the game every time. Whether they were ahead or behind, it was the same story. The other thing that surprises me a bit are the totals on special teams. Much was made of the huge power play advantage that the Blackhawks had in the series (42:11 on the PP compared to 26:49 for Vancouver), but the Canucks' ability to generate a lot more chances per minute closed that gap almost completely. Hard not to think about Chicago's lone power play chance in overtime of Game Seven when you see that. 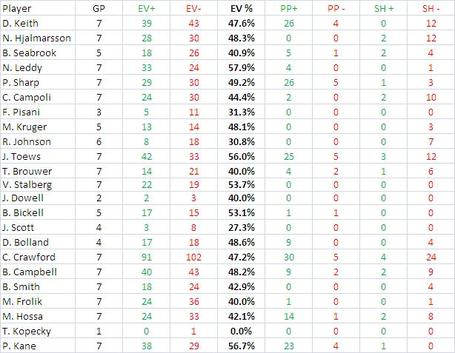 Jonathan Toews and Patrick Kane both played wonderfully, but they needed more support. Some of the lesser lights got beat up badly, but that's mostly to be expected, especially given the way Alain Vigneault uses his bench. What really hurt was Marian Hossa, Troy Brouwer, and Brent Seabrook getting beat up in important roles. I expected more of Hossa in particular. Granted, he was pretty much even if you throw out the seventh game, but the Hawks needed a lot more than break-even hockey from Marian Hossa in order to win this series on merit. Looking ahead, Nick Leddy's performance in a sheltered role is a huge positive. It's surprising that, given his results, he wasn't given a larger role. 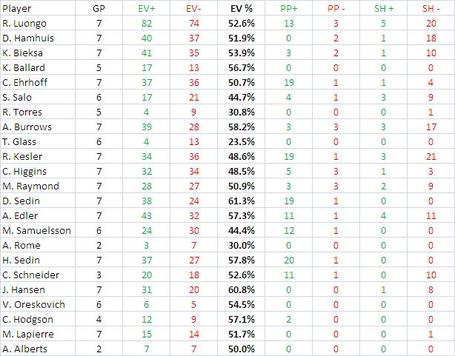 There's an awful lot of good news in this chart for the Canucks. Daniel and Henrik Sedin, for example, didn't even look all that impressive in this series, and yet there they are leading the team in scoring chance percentage (and in actual scoring too). I mentioned the very good power play, and the Sedins were a big part of that too. The scary thing is, I get the feeling that they can be even better. With Sami Salo getting injured in this series (shocker!), it must also be encouraging to see Keith Ballard playing well in a limited role. Maxim Lapierre is another guy who ended the series playing more (and more difficult) minutes than might reasonably be expected, but managed to do quite well. Ryan Kesler looks okay by these numbers, but a lot of that is thanks to Game Seven. Before that, he'd been getting beaten up pretty badly by Toews and friends.