J.F. Jacques is an anathema.  He's faced an asinine number of injuries and that should be taken into account when considering his young career.  But even with those injuries, aside from a 65 game stint in Hamilton in 2005-06, Jacques has never been a productive player. 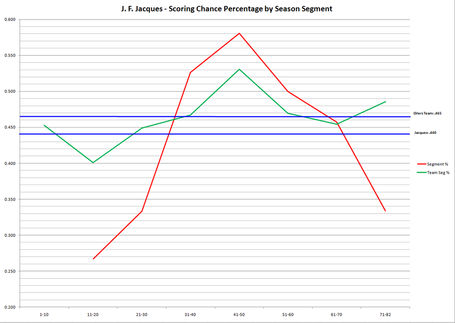 The small sample sizes involved do strange things to the charts.  He was over 50% for three consecutive segments, but totaled only 68 chances in those 30 games.  He finished with four segments above the Oilers' segment average and three far below the Oilers' segment average, but finished with only 166 total chances on the season.  For context,  16 Oilers had more chances against than Jacques had total chances.

The Ryan Jones effect dominated Jacques' early season as well.  We must take sample sizes into consideration, but when Jacques was apart from Jones, he was two chances short of 50%.   While the numbers with Colin Fraser also look poor, Jacques' chances with Fraser but without Jones were 36 CF - 40 CA or 47%.  Figure that out.