Replacing Kyle Brodziak wouldn't be difficult for most teams.  For Edmonton, however, it's akin to capturing the mares of Diomedes.  Steve Tambellini's attempt at finding a penalty killing fourth-line center to win defensive zone faceoffs meant trading a sixth-round pick for Colin Fraser, a coup in the minds of the experts - they'd received the 99th and 133rd picks from the Minnesota Wild in exchange for Kyle Brodziak and the 161st selection.  All Fraser had to do was replicate the performance of Brodizak. 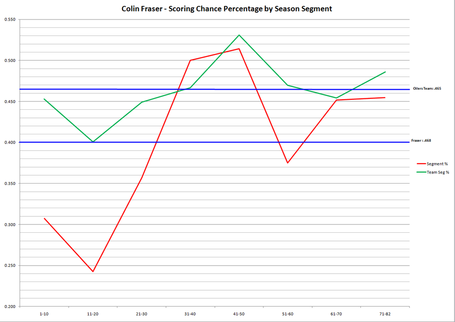 The Ryan Jones effect dominated Fraser's first 1/3 of the season.