Andrew Cogliano is Maxim Afinogenov, he just doesn't realize it yet.  Cogliano should be a dynamic, play-making winger, capable of lapping the field on every shift, pushing the play up ice and creating havoc within the defense with outside speed and inside drive.  He should be. 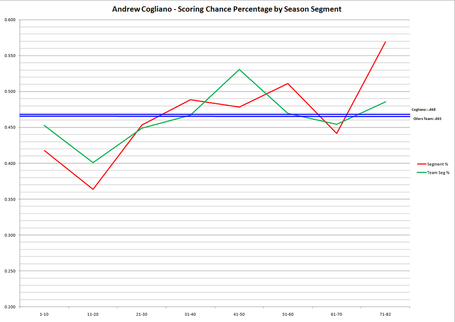 Cogliano's chance percentage was above the team percentage during four of the eight segments above and he was off of the charts with a .570 in the final segment.  The final segment helped to balance his first two segments and Cogliano beat the Oilers overall percentage by a couple of hundredths.

My favorite part of the Cogliano WOWY is how closely Ryan Jones resembles Gilbert Brule.