When he's been healthy enough to play, Ryan Whitney has been nothing but terrific since joining the Edmonton Oilers. Through fifty-four games, he's scored thirty-eight points, amassed a +20 rating, and played an average of 25:21 per night. This season, Whitney's scoring chance percentage was significantly better than the team's, at least in the games that Whitney actually played. The numbers are ridiculous given that Whitney did all of this in fifty-four games with the Edmonton Oilers. And so, as it happens, Bruce pointed to a few things that might give us pause as we look to the future, which I'll build on after the jump.

Whitney's PDO (save percentage while on the ice plus shooting percentage while on the ice), for instance, was the sixth-highest in the league (min. 20 GP), which sounds lucky even before you consider that Whitney played mostly in front of a festering old drunk: the Oilers were outshot 355-275 with Whitney on the ice at even strength, and yet the Oilers outscored their opponents 33-19. Yowka. If both goalies had instead saved 92% of the shots they faced, Whitney would have been outscored 28-22. Still not bad on the Oilers, but not very good either.

Whitney's role was also somewhat atypical for a guy widely considered to be a part of the team's "top pairing". Here's the zone start percentage for all of Edmonton's defenders through December 28th (Whitney's last game): 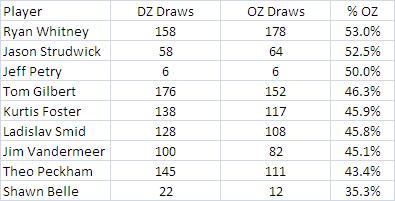 Those aren't the numbers I expect from a "number one" defenseman. I wouldn't go so far as to say that he was sheltered, but given what the rest of the defense was left with, it's pretty clear that the coach was intentionally putting him in offensive situations. From a strictly statistical standpoint, the offensive numbers themselves are likely to regress, but given the amount of success he had by eye, I'd be very surprised to see Renney use him in a different role. Ryan Whitney has shown that he can be a very good offensive defenseman; he has not shown that he can be a very good all-around defenseman (playing big minutes in all situations and taking the tough matchups too), and in fact, the evidence would seem to suggest that he'd be overwhelmed.

Might Whitney take that next step in the future? Maybe, but this isn't the time to find out. It's certainly possible that Whitney's foot issues are behind him, that he'll come back without any skating issues, that he'll be "in the best shape of [his] life." Then again, he might not; he might need some time to get back into form after not playing for nine months, or he might return a lesser player altogether. It would be unwise to ask him for more than he's given before, and I expect that Tom Renney will agree.

Projection: A healthy season that includes big minutes in an offensive role, forty points, and a negative shot (and probably goal) differential at even strength.