When I try to describe to an American how many Canadians feel about Paul Henderson's 1972 series winning goal against the Russians, I struggle. The closest comparison I can come up with is "where were you when they shot JFK." Although there are now a few generations of Canadians who were not yet born when that goal was scored, we are aware of what it meant for Team Canada and our country. The Tragically Hip were inspired by the goal enough to write a song, you have no doubt seen the pictures or the video in commercials and you have definitely heard the audio replayed saying "Scores! Henderson scores for Canada" This goal has been called the "goal of the century."

As the goal means to so much to so many Canadians, it should come as little surprise that the physical pieces of the game have also come to mean so much to Canadians. Paul Henderson's iconic jersey recently sold for over $1 million, in an online auction that many felt shouldn't have happened in the first place. Some were concerned that this item was something that should be in a museum for all to see. The new owner and Paul Henderson himself seemed to feel similarly, and have organised a cross Canada tour for the jersey. Paul and his tour are on their way back east across the country, but I was able to catch up to the truck during their visit to Calgary Alberta. 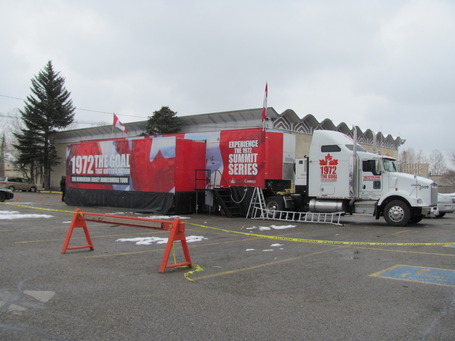 The tour is set up in a trailer that is hauled by a semi truck. The truck is beautifully decorated and easily distinguished from any other vehicle that may be in the parking lot or vicinity. In Calgary, the tour was parked just off of the University of Calgary campus and visited by hockey fans young and old.

There are several pieces of hockey history and information about the summit, the players and the cultural significance of this series. This was at a time when NHLers could not play for their company in the Olympics, but they were able to play of their country in other ways. The photos and the memories may look old and faded, so this is a great way to remind people, or for people like me to learn more about something that they never got to experience. Many never got to celebrate Henderson's winning goal, or chuckle when Phil Esposito fell to the ice after tripping on a rose stem during the introductions in Russia.

There was one article that I did not expect to see, but that I thought was really special, the jersey from goalie Vladislav Tretriak, the losing Russian goalie. Of course the Russians must not look back on 1972 Summit Series with the save reverence, but it still seems a treat to have another physical piece of hockey history for all to see. 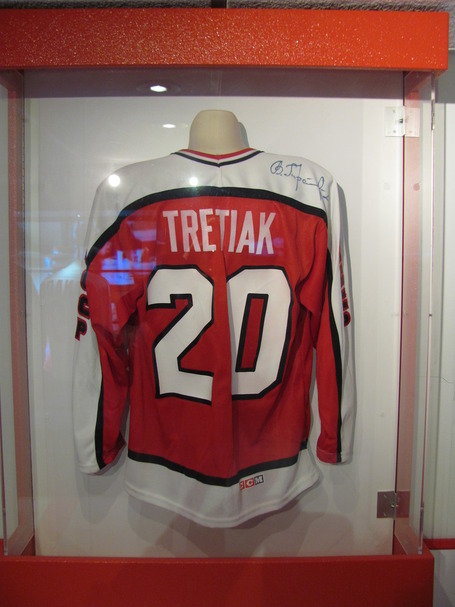 Canadian hockey hero Henderson is battling cancer, but looks healthy, fit and healthy. He smiles and says that "You've got today and you've got to enjoy the day." Henderson is a motivational speaker and works with his wife on Christian and marriage endeavours, and it is not all that surprising that Henderson is so positive, look at what he has accomplished and how well loved he is by Canadians.

Henderson may be a little weary from the road, but still had a warm smile and chuckle when I told him I hoped to write a little about him and his tour, and asked for a few minutes for a quick interview since my Edmonton Oilers were out of the playoffs already.

Copper & Blue: What does it mean to you to be able see and interact with the fans like this, the ones that remember and ever the ones who never saw the goal first hand?

Paul Henderson: Well, it's been a lot more fun than I thought it was going to be. I thought it was going to get old after a few cities, but people are so passionate about hockey. They're so passionate about that moment that they're so aware of where they were and what they were doing. They're so positive, there's nothing negative about this whole thing, so we've had a great time. Of course Eleanor (Hensderson's wife) travels with me, so it's been a wonderful time.

Copper & Blue: Who came up with the idea to go out and tour with the jersey?

Paul Henderson: Well it was [Mitchel] Goldhar the guy who paid 1.27 million for it. That's one of the reasons he bought it. He thought that Canadians need to experience it. First of all, the sweater needed to come back to Canada and to stay in Canada so he thought that Canadians need to have such an iconic memory in their hockey history so he's put this all together, spent millions of dollars, and there's no charge for this whatsoever. So it's just incredible and for me, everyone remembers that one goal, but I actually scored seven. So you come in here, and you can see six other really nice ones that I scored.

Copper & Blue: Who was your favourite teammate from the 72 Summit Series?

Paul Henderson: Well Norm Ullman and Ron Ellis and I played together for six years with the Leafs. Ronnie and Norm were good friends of mine and Ronnie and I we got to play the series together and Bobby Clarke was our centre ice man. Ronnie is still one of my great buddies, and a lot of great memories from that series.

Copper & Blue: Do you get together very often with the other players?

Paul Henderson: We do every fall. We have a golf tournament and about 25 guys come back, we average about 25. In 2012 it will be our 40th anniversary and we're hoping we get the whole team back. Of course there are three of them that have passed away; Gary Bergman, Billy White and now Richard Martin.

Copper & Blue: So you've written two books on hockey and your summit experience,

Paul Henderson: Yes, I've written two of them and my third is coming out, it's going to be out in the fall. It's called "How Hockey Defines Canada."

Copper & Blue: Wow! I wonder how you came up with that idea, ha ha.

Copper & Blue: Do you have any advice that you like to give to youth that come to see this? They didn't see the goal first hand, but they have goals and aspirations of playing in the NHL.

Paul Henderson: You've got to have dreams; you've got to follow your dreams. I tell them I started practicing my autograph in grade five because I had decided that I was going to be a NHL hockey player and I wanted to have a good autograph. I think you've got to have goals, so I tell them that all of the time. You've got to be passionate about your goals because in this world today, you've got to want it pretty bad or you're probably not going to get there. I think that the secret is to get up in the morning and decide that this is what I'm going to do today, give it your best shot. When you put your head on the pillow at night, you feel pretty good about yourself.

Copper & Blue: Excellent advice, thank you so much Paul! Enjoy the rest of your tour.

There are still more dates to come for the historic jersey tour. If you are in Eastern Canada, or if the tour is going to be near you, I suggest you check it out. If Henderson is there when you arrive, he will greet you and ask your name. He and his wife want to meet the fans, they want to interact and give the people of Canada great hockey legend memories. 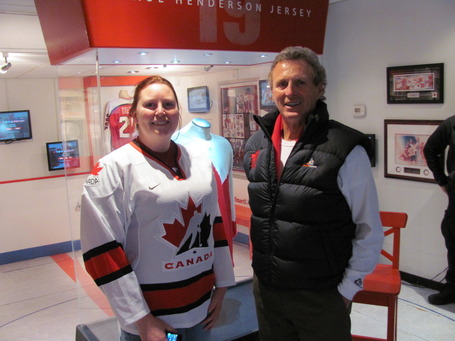