First up, I'll post the results along with a couple of simple controls to see if I did any good. The two controls I've chosen are two very simple systems. In one system, the prediction is simply that the team will have the exact same goal differential as they had the year before. In the other system, the prediction is that every team is equal, and so they'll all end up with the a goal differential of zero. Hopefully I can beat these two rather simple controls: 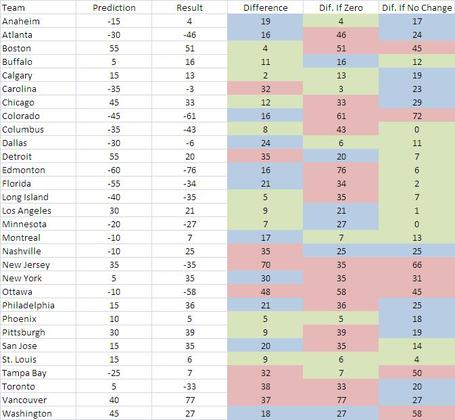 I was able to clearly beat the system that decided all teams were equal, but saying that all teams would perform just as they had the year before was actually quite close to my system. Although I scored better on average, that system had more predictions in the "good" category. A sad result for me, but I'll take some solace in having the best average and having a median score quite close to the "good" category. So what about some of these bad predictions? What went wrong?

That's a pretty massive difference, and to some extent it comes from being plain wrong about how good this team was going to be. On the other hand, Gabe just posted a chart showing that New Jersey was the sixth best team in the league at Fenwick percentage with the score tied, so it's not like thinking this team would be good came from nothing. The big reasons that they weren't that I didn't see coming were (1) a really poor EV shooting percentage (6.5%), (2) Martin Brodeur providing less than average netminding (.912 at EV is really quite bad), (3) a key injury to Zach Parise (he played just thirteen games), (4) Ilya Kovalchuk having his worst offensive season since his rookie year (lowest shot total, goal total, third-lowest shooting percentage), and (5) a really awful power play after finishing in the middle of the pack a year ago. I'm not sure that any of those things were really forseeable, and assuming the Devils don't blow this thing up, I think they'll be a good team again next season.

Before the season started, I called the tandem of Brian Elliott and Pascal Leclaire the worst in the NHL. That part of the prediction worked out pretty well (although the worst tandem was Dan Ellis and Mike Smith in Tampa Bay), but the rest of the team wasn't close to as good as I supposed. I thought that the Senators had a pretty good team at even strength but many of the players they'd counted on before - players like Mike Fisher, Daniel Alfredsson - were handily outplayed by their opponents, while other key players like Peter Regin and Jason Spezza went significant time on the injured list. The acquisition of Sergei Gonchar was also extremely disappointing. With Gonchar and Kovalev, I thought that Ottawa could have one of the best power plays in the league. In reality, they were one of the worst, generating just 46.1 shots per sixty minutes of 5-on-4 ice time, the fourth-worst rate in the NHL. The acquisition and signing of Craig Anderson should help the goaltending in the years to come, and the selling off of assets at the deadline has helped this team to acquire cap space heading into the summer and draft picks for the future. I think there's a chance for this team to have a quick turnaround with a great summer, but more likely, the newly-re-signed Bryan Murray (aside: what a mind-boggling decision) will still be licking his wounds from past free agent forays come July, which means the Senators are on the slow boat to China.

One of the reasons I had the Leafs doing so well was my feeling that the Northeast was a very weak division. The division part was right on. The Leafs doing well part, not so much. Why is that? Well, generally, I subscribe to the theory that it's easier to go from awful to average than from average to awesome, and the 2009-10 Leafs were a good even strength team (a Fenwick percentage of 52.7% with the score tied) with a few really awful traits besides. Surely the dead last penalty kill, dead last power play, and terrible goaltending would all improve! And they did! Sort of. The Leafs finished 29th in shots-for 5-on-4 with 44.1 per sixty minutes, which... isn't last! On the PK, they finished 8th best in shots allowed 4-on-5, which would have been great if it wasn't accompanied by the worst 4-on-5 save percentage in the league. And then James Reimer was great, except that he only played about 35 games and the rest of them didn't go so well. To top it off, the Leafs regressed massively at evens, owning a Fenwick percentage of just 44.4% with the score tied over the course of the season. So basically, I was dead wrong. I know the Leafs are optimistic heading into the summer, and maybe they'll make a big move in free agency to help the cause, but I actually find myself more pessimistic about this team now than I was a year ago, at least for the immediate future.

The great thing about using goal differential for the standard is that I can predict the Canucks to win their division and still be way underestimating them. I had their goal differential declining slightly even though I thought they were a better team and followed that by saying: "if they shoot like they did last year, they'll blow my prediction out of the water." As it turned out, I had the wrong percentage going bonkers. The Canucks did in fact see their shooting percentage regress from 2009-10 to 2010-11 (9.2% to 8.1%), but also saw their EV save percentage go from .924 to .933 on the strength of Roberto Luongo and stellar work from back-up Cory Schneider. Those two also helped to bring an otherwise mediocre PK to the top of the league. At any rate, I don't feel bad for low-balling the Presdients' Trophy winner a bit. It'll probably happen every year.

Dammit. I thought that I gave the requisite, "Ah, but this is Nashville" bump to my prediction after looking over what seemed to be a roster lacking in firepower. Alas, I did not. Chris Burton came by in the prediction thread to tell me that I was wrong, that the Predators had eight 50-60 point scorers, and that the goaltending tandem of Pekka Rinne and Anders Lindback should be given a lot more credit than I was willing to give. He was wrong about the offense (they had two, both scored 50 points, and one wasn't even on his list of eight guys), but oh so right about the goaltending. Rinne's results on the PK were off-the-charts (.912 Sv%), and much better than what could have been reasonably expected. His EV performance was more reasonable (.932 Sv%), but still better than I expected. Lindback's performance at EV (.930 Sv%) was also incredibly surprising given his lack of NHL experience and somewhat pedestrian numbers in the Swedish Elite League. Some of this might be rink recording bias (Nashville may well overcount shots), but some of it is no doubt those goalies just being good. Honestly, I think the goaltending will come back a bit going forward, and that the Predators will move back down toward even rather up toward elite.

The second division-winner on the list of bad predictions, but this time I overestimated what they'd accomplish. I thought the Wings would be just as good as they were last year if not better, and that their shooting percentage would recover from a down-year in 2009-10 (they shot 6.7% at EV). My only concern was the goaltending, and that was indeed problematic. The shooting percentage did jump back up to 8.0%, but Jimmy Howard and Chris Osgood were both less than average at EV. The team also took a hit on the PK, which took me a little bit by surprise, going from a goal differential of -35 in 2009-10 to -48 in 2010-11, at least in part because the club was shorthanded a lot more frequently (300 times compared to 267). With Howard re-signed for the next couple of seasons, his performance will be the big key in whether or not the Wings can get back to being a dominant team via goal differential. I don't think he's a great goalie, but I do think he'll be a bit better than he showed this year, and with Osgood's contract up, the Wings should have more capable support behind him.

The Lightning are one of the most fascinating teams of the season for me. If they had gotten any kind of goaltending at the beginning of the year, this prediction would look even worse (I didn't flag their goalies as a major concern). The team's core players didn't change all that much from 2009-10 to 2010-11. Three of the top five defenders and six of the top nine forwards by time on ice (min. 30 games) played on both clubs: Vincent Lecavalier, Steven Stamkos, Martin St. Louis, Ryan Malone, Steve Downie, Nate Thompson, Mattias Ohlund, Mike Lundin, and Victor Hedman. In that 2009-10 was terrible, I expected them to be better, but not that much better. After all, is the supporting cast and change in coaching really going to make that much of a difference? Yup. The Lightning went from one of the worst Fenwick percentages with the score tied in 2009-10 (45.8%) to downright good in 2010-11 (52.2%). That's an enormous change, and there's not much reason to think it won't last. This result (and if I'm honest, Vancouver's success) makes me think that I might not be giving enough credit to the value of depth, and potentially, coaching. Given the state of the Oilers (they're bad), it might be interesting to see how Tampa made the jump.

This is a bit of a funny one. I pegged the club to be very bad and instead they were just normal bad. Carolina went young this season, and some of the players seized the opportunity. Jeff Skinner leads the pack as the likely winner of the Calder Trophy, but other young players like Jamie McBain and Brandon Sutter also had fantastic seasons. That said, there are some signs that this club is still pretty darn bad. Their Fenwick percentage with the score tied regressed to 45.7% this year (from 48.4% the year before), but they were much better overall (47.3%), and scored plenty coming from behind, which is why the goal differential is palatable. I'd say the goaltending helped, but one thing that I was on the money with was Justin Peters who undid most of Cam Ward's good work with his .875 overall save percentage, the worst mark of any goalie to face at least 100 shots. I don't think this team will be very good next season, but they could do themselves a huge favor by getting a new backup.