This is the first article in a series that will comprise a comprehensive review of the Edmonton Oilers in 2010-2011.  The Copper & Blue has partnered with the Cult Of Hockey's Bruce McCurdy and David Staples to bring you this series which will feature three articles summarizing each player's season from a number of different viewpoints.  I'll start off with a review of scoring chances, courtesy of Dennis King's amazing (and masochistic) work at MC79Hockey.com.  Bruce and David will follow up with an advanced stats and individual scoring chance analysis at The Cult Of Hockey and Scott or Ryan will close here with an overview and look ahead for each player.  We'll finish up with a review of the Barons who spent time in the NHL, as both Neal and I will offer a statistical look of their season in Edmonton and Oklahoma City.  First on the block is Jim Vandermeer.

Below is a graphical representation of the above table with both the team and player season average in blue: 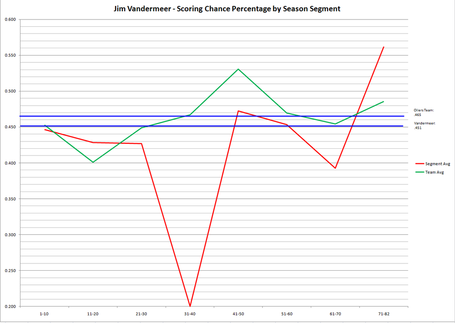