Share All sharing options for: PK Save Percentage in 2010-11 - Final Results

Much like in past seasons, earlier this year I looked at PK save percentage across the league to see who was performing well, and which teams might be benefiting from a goaltender who's been particularly hot on the PK and likely to regress during the push for the playoffs. Over a long period of time, goaltenders generally cannot sustain a PK save percentage higher than .900, but in one season, that kind of performance isn't uncommon. That doesn't, of course, mean that we should expect it to continue into the playoffs. So let's take a look at the year-end results and figure out which playoff teams might have been getting a bit of luck (or unusually in-the-zone performance) from their starting goalies.

In the chart below, I've included all of the goaltenders who have faced at least 200 shots during the 2010-11 season. There were only twenty-eight goalies who met this criterion, and their average PK save percentage was .879, which is much higher than the longer-term trend, which suggests that (including all NHL goaltenders) average performance is closer to .866.  In the table below, I've used each benchmark, although I'm quite partial to the first one as being "average" for a starting goaltender. Here are the results: 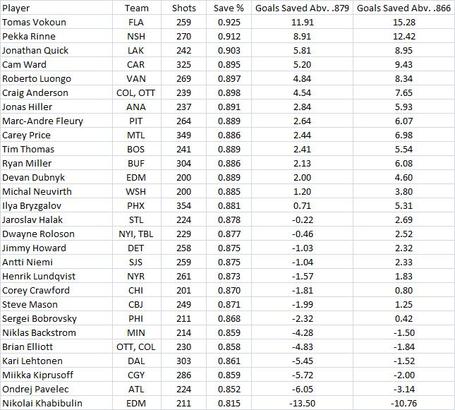 One of the things that we should note from the difference in this group's average and the longer term trend is that talented goalies really are better at this, and so while we do expect some regression to the mean, that regression would be to each individual's long-term trend rather than to a "league average" type number. It is interesting, however, to note that even though only twenty-eight goalies made this list, all sixteen playoff teams have a representative and none of those are in the bottom five. Also, Nikolai Khabibulin is so, so bad. Anyroad, let's take a look at the playoff goalies, and compare this year's results to some longer-term results: 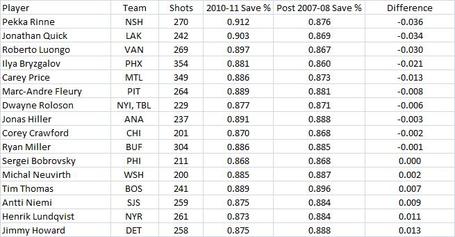 It's probably not super clear in the table, so I'll just say that the "Post 2007-08 Save %" column includes results from the 2007-08 season. Now, obviously, some of these goalies have more results than others. Michal Neuvirth, Corey Crawford, and Sergei Bobrovsky are all crowded together because they just haven't seen many shots. That said, none of those guys is blowing the doors off, so we shouldn't expect any of them to regress too much (with Neuvirth being the most likely to be an exception). On the other hand, a few of the more established goaltenders have had years way out of line with their longer-term-but-still-recent trend. Pekka Rinne, Jonathan Quick, Roberto Luongo, and Ilya Bryzgalov have all made their clubs look better than they probably are on the PK, and could well play well below their season performance in the playoffs, although with so few PK shots in a playoff series, it amounts to just one or two goals. Still, one or two goals ain't nothing, especially for teams like the Kings and Coyotes who need everything to go right in order to have a chance to win.