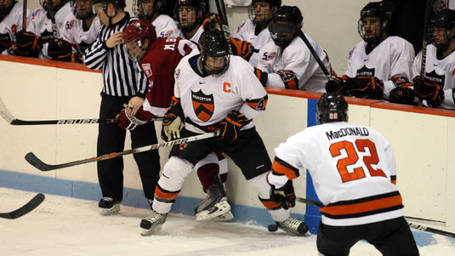 The Edmonton Oilers have announced the signing of Edmonton native Taylor Fedun to a two year contract. Fedun played his Junior A for the Fort Saskatchewan Traders & Spruce Grove Saints before matriculating to Princeton where he majored in mechanical and aerospace engineering.

The Edmonton native has spent the last four years at Princeton playing for the Tigers. In 127 games he recorded 20-48-68 with 154 penalty minutes. Fedun led the Princeton defense in +/- in each of the last thee seasons posting +13, +7, +6. He was awarded the team’s Hobey Baker Award as Princeton's top freshman in 07-08. He was a second-team All-ECAC Hockey and All-Ivy selection in 2009-10 and was invited to the Canucks Development Camp in July. He also received Princeton's 1941 Championship Trophy, presented annually to that varsity player who best reflected the winning spirit of the 1941 championship team and in so doing was an inspiration to his teammates.

Fedun led Princeton in power play points and goals, shooting 21% with a man advantage and was tied for 4th in total points, 5th on the team in assists. As a senior, Fedun fired 77 shots in 29 games. Fedun was on Central Scouting's "Players To Watch" list in 2005 but went undrafted in June of 2006. He was considered by a number of sources to be among the top college free agents available, and was expected by some to sign with the Vancouver Canucks.

Fedun will report to Oklahoma City and will play for the Barons in their stretch run towards the AHL playoffs. Though the Clear List was published today, according to Neal Livingston, "Collegiate and Junior players can be added to the 22-man roster after their seasons have reached completion," so Fedun is eligible for the playoffs.