Why Is Even Strength Play So Important?

Share All sharing options for: Why Is Even Strength Play So Important?

Two of the most common requests I encounter when discussing possession metrics and advanced stats here, via e-mail or in person are "Can you use more charts?  I love charts, they are so much easier to understand," and "When you talk about these stats, you're always talking about even strength numbers.  Why is even strength play so important?  I always hear announcers say that the power play and the penalty kill wins games.  Can you explain that?"

I've decided to kill two birds with one stone and explain this in chart form.  One of my favorite ways to look at how advanced stats impact winning teams is by stripping away team names and evaluating the finishing position of each team by the advanced stat we're interested in.  After the jump, I'll give the same treatment to some traditional stats to show why even strength play rules the day.

Our hypothetical e-mailer is right - announcers do often talk about how important the power play is to a winning team, but is that really the case?  In the line graph below, I've calculated the combined power play percentage of all of the teams in finishing ranks from 2006-07 through the end of the year (projected). 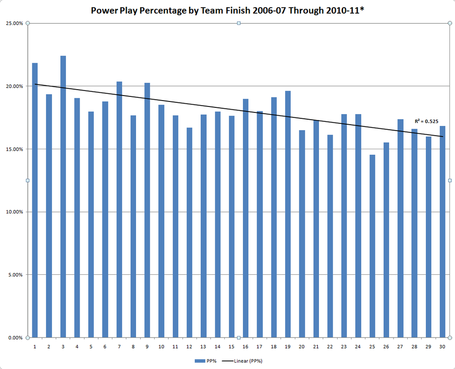 On top of the graph, I've used the linear regression trend line tool to show the trend.  I've included the R-squared value (.525) for the people who often ask for that as well.  Essentially, there is some correlation, but given the R-squared value, that correlation isn't particularly strong.

But special teams are very important, right?  So if it's not the power play that drives a winning team, it must be the penalty kill.  Below, in chart form, is the combined penalty kill percentage of all of the teams in finishing ranks from 2006-07 through the end of the year (projected). 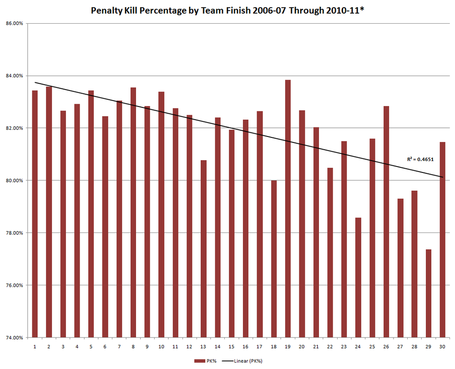 The R-squared value here is .465, indicating even less correlation between finishing rank and penalty kill efficiency.

What happens when we look at special teams as a whole?  I've looked at Special Teams Efficiency before and noted the Oilers' historically bad special teams.  With yet another line graph, I've totaled the combined STE of all of the teams in finishing ranks from 2006-07 through the end of the year (projected). 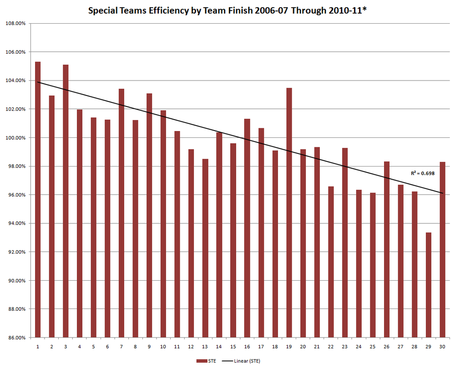 There is a stronger correlation (.698) between STE and finishing rank, and it's significant enough to investigate (and yes, I promised Desjardins I would do this).

Now, on to even strength, the subject of this post.  I've totaled the combined even strength goal differential of all of the teams in finishing ranks from 2006-07 through the end of the year (projected). 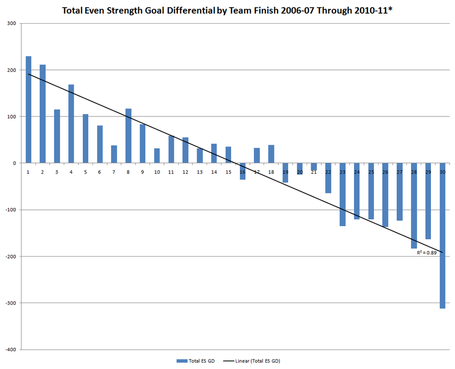