Tales From the Road: St. Paul

Share All sharing options for: Tales From the Road: St. Paul

It was a snowy cold Tuesday afternoon in late February 2011 when I finally arrived in Minnesota, but there were several comforts from home everywhere I looked. It all started with the waist hight snow, and slushy sidewalks and intersections. St. Paul and Minneapolis Minnesota are twin cities that reminded me very much of the time I spent in Grand Centre and Cold Lake Alberta. Driving down the streets of St. Paul one sees store fronts, small business and snow piled up nearly car height along the sides of the streets. At some points lanes disappeared and yet there was no honking, no obscene hand gestures, people were calm. Perhaps this was because I was travelling the streets off peak hours, but I really don't think so. I believe that the people of St. Paul really are that nice and considerate.

The Xcel Energy Centre is right downtown St. Paul next to the Science Museum of Minnesota, the convention Centre, museums and plenty of public transit stops. Flags around downtown often are either Wild, NHL, American or even just outlines of a hockey player. It seems that Minnesota may in fact be "The Hockey State" or even as I also saw "The State of Hockey."

I have a new favourite arena at this point in my travels, it's the Xcel Energy Centre. As you walk into the arena you are surrounded by wood panelling, it feels like a ski lodge, out in the wild even. 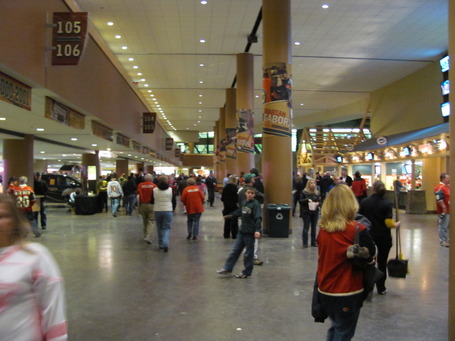 As you inhale deeply, you get catch a mouthwatering, comforting and delicious smell of barbecue sauce. The concourse is wide and spacious as are the entrances to the arena. The fan stores are large and accessible. Fans piled in early, enjoying the wide variety of foods and drinks. There were face painting stations set up, and children were anxious to get coloured to support their team. On the second level, all along the walls are various hockey sweaters from various leagues and vintages. The arena also felt warmer than others I've been to, the comforts of the arena increased with everything I saw and experienced it seemed. Along the concourses were also memorials to Minnesota and hockey greats, including throwbacks and memories of the Minnesota North Stars. 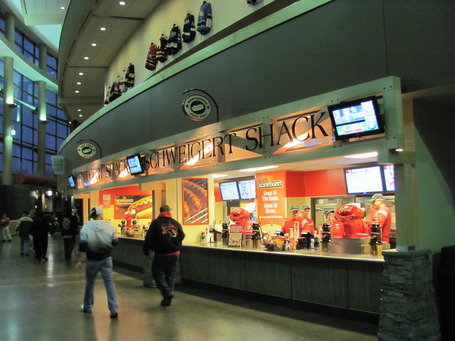 There were stations for children and the Wild theme was everywhere with trees and wildlife displays. I love that this city and this arena are able to embrace their name and logo the way they are. 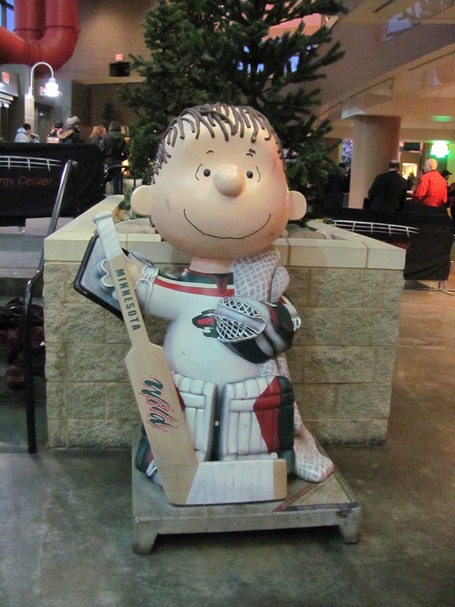 They have their own Linus in Minnesota it seems

The amazing thing about St. Paul/Minneapolis Minnesota is that this is a place hockey left, briefly, yet was able to come back. The fans remember what it was like to be without hockey, and therefore hold this Wild team even closer to their hearts.

During warm-ups, the Wild wore their camouflage jerseys, and would you look at Cal Clutterbucks' hair? Clutterbuck seems to be a favourite with the young fans as there were several children pressing up against the glass with signs addressed to him, some even asking for pucks. 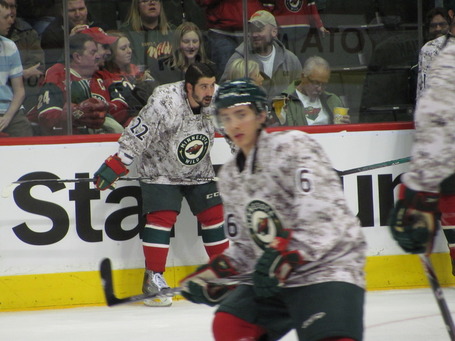 The fans know their hockey in Minnesota, and even some of the fans there are excited to see the Oilers rookies play now and in the future. A father was at the game with his children behind me and I overheard him telling the children "That guy over there, number 28, he has the worst hair in hockey." I couldn't help it, I had to interject. "Did you know that Ryan Jones is growing his hair for wigs for children suffering from cancer? His wife only gets him with one nice haircut a year" That seemed to change everything. "I did not know that." The man said, and followed with "You see that kids, that guy wearing number 28 has the best hair in hockey." I loved it.

I made some other friends during warm-up, and they were quick to answer all of my questions about the arena, the mascot, hockey leaving Minnesota and even what the new arena has done for the downtown. I was surprised to hear the term "revitalised our downtown." I thought that that was a comment reserved for Edmonton.

The Wild mascot, Nordy is pretty neat even though I'm still not sure exactly what Nordy is. All I know is that he has a mullet, how can you not love that? Nordy gets to play all kinds of on ice games with the fans, including a power wheel race that I wish I was a part of. Just look at how most of the fans stay to watch the action. 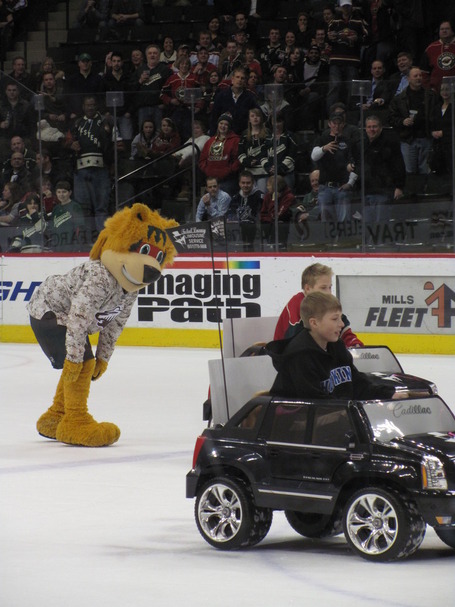 I know I've mentioned this before but it's such a nice treat to enjoy some lower bowl seats when I'm away in other cities. You really get to see another side of the game. For example, Theo Peckham doesn't seem to stop talking or smiling during games. You likely got that impression from watching at home or other arenas, but it never gets old for me. 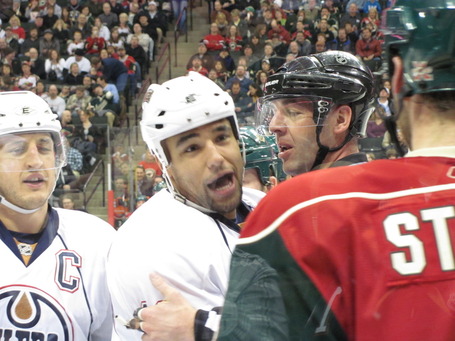 I didn't know at the time that this would be one of the last times I would see Dustin Penner in an Oilers uniform on the road. Players move, that's just how the business of hockey works, but when it's yours it means a little more. I did take a little extra care in watching both Dustin Penner and Ales Hemsky, just in case. 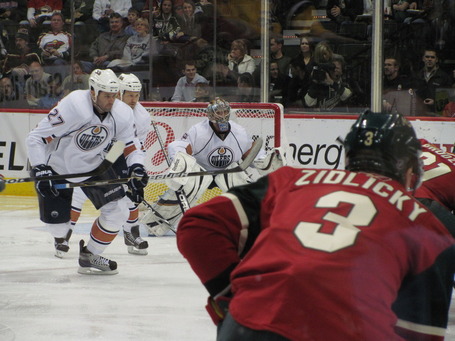 The Oilers lost this game, 4-1 but I was expecting this game to be a loss. The fans of course gave me a gentle ribbing as I left the arena, and really I would have been disappointed if they hadn't. There weren't many Oilers fans in the crowd and as I would start to respond to these fans, many asked me if I was from Edmonton. I'm not sure that my accent gave me away, I think that in these parts people are Wild fans and that's that. 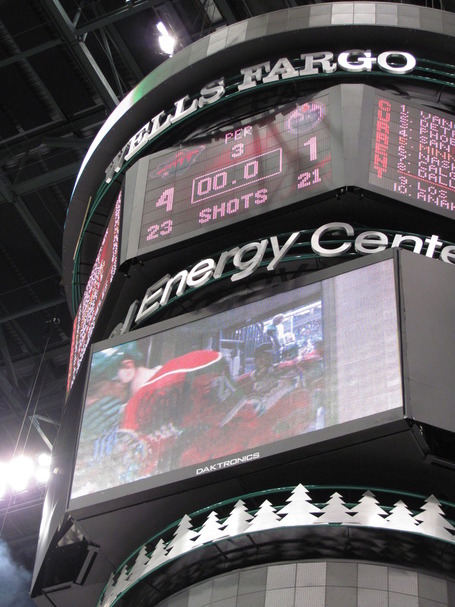