We Just Finished Year One

Share All sharing options for: We Just Finished Year One

When the Edmonton Oilers played the Ottawa Senators three weeks ago, Kevin Lowe was on the program to speak about the organization, and said that the Oilers were in the first year of a four to six year process. My instant reaction was, "That’s an interesting (and depressing) statement from Kevin Lowe on the window… four to six years…" I'd had hope that the Oilers were going to be trying to win much sooner than that, and hope is a funny thing because even after old Vish made things pretty explicit, I still didn't really believe it. I wanted to believe that he was maybe just managing expectations, you know, setting the bar low so that when the Oilers added some pieces over the summer, they might "get there" sooner than expected. That's why Dustin Penner being traded hurts so much. I mean, yes, it was a bad trade no matter what the plan based on the return, and yes, Dustin Penner is a very cool guy and talented player, but for me, it's the fact that the hope I had for something better has been sold down the river. It's been five straight years out of the playoffs, and apparently, we've only just begun. That's depressing. The fact that the exact same yahoos who failed miserably for four straight years before the rebuild began are still there running the team is really depressing.

But to some extent, the past is the past, and to be totally honest, I just can't keep myself from cheering for this team. I may not like the plan, but I know roughly what it is, and I'm coming to terms with it. The management group has pinned down a timeline, which means they can be evaluated based on that timeline.  No one will be fired for this season, and no one will be fired for the next one either, since it seems a virtual lock that it's designed to be another year in the tank.  I don't know what the plan is for Year Three, but by Year Four, this club needs to be at least in the mix for the playoffs, and in Years Five and Six the real fun begins. After the jump, I'll take a peek at what the Oilers have built already.

As of now, the Oilers have fifty assets (either players or 2011 draft picks) that will be eligible for the Copper and Blue's next Top Twenty-Five Under Twenty-Five. Of course, that includes guys like Cameron Abney, Matt Marquardt, Bryan Pitton, and Jordan Bendfeld, all of whom are likely to be out of the organization by the summer rankings, but the club is also already deep in real talent under twenty-five, which is pretty important considering the stated window. If the goal is (as it should be) to build an excellent and affordable top nine forwards and top four defense for Years Four to Six, here's what I think they've got so far for sure-things:

So before going any further, here are the colours:

As for the actual players, this looks pretty good to me.  Gilbert, Whitney, and Hemsky may be a little bit old by then, but it seems reasonable to think that all three players will be top contributors at that time.  It's of course possible that Hemsky gets traded soon, but if he does, management needs to add another player to this list (which is why the Dustin Penner trade remains brutal).  The golden trio will be on their second contracts for the window, which tend to more affordable than UFA contracts, and this year's first-round selection could be on his ELC for all of years four through six if the Oilers hold him in Sweden for two years to let him develop, which seems possible, if a bit unlikely.  Looking at this list is heartening because the job is already half-done, with the major needs coming at center and on defense.

One player who is absent is Shawn Horcoff, a man that I really do appreciate, but who will be playing his 35 through 37 year-old seasons during years four through six, and for years four and five will still have a $5.5M cap hit.  It pains me to say it, but the Oilers will need to move him along before too long, which might mean giving the man more minutes in the offensive zone at even strength and on the power play in order to pump his value a bit.  Trading Shawn Horcoff will no doubt make the team worse in the immediate future whenever it happens (and I'm not advocating that it happen this summer), but it's the prudent thing to do if the team doesn't plan to compete until 2013-14.  And they don't.

Next up, here's a look at the players that the Oilers have in the pipeline who have a reasonable chance of being able to help in a top nine / top four role in three or four years: 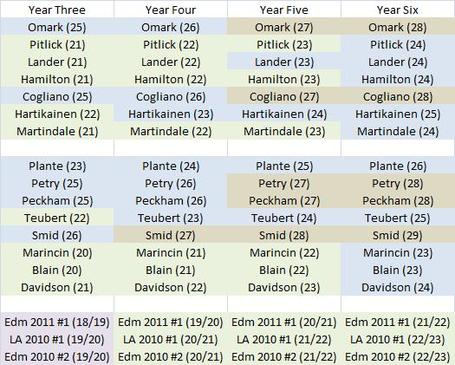 That's a lot of talent that will be in its early prime, which should provide the Oilers with tremendous depth. It gives Edmonton options because they can move some of these players for someone who has already established himself at the NHL level and can help in the desired window (i.e. the opposite of the Dustin Penner trade). The great majority of these players will also be on either entry-level or RFA contracts, which should serve to keep costs down and allow the Oilers to add via free agency or trade in an area of need.

It really is a good-looking group of prospects, and if the plan is to hold off on competing until Nikolai Khabibulin has been purged from the organization, I think there's a very good chance that this management group will be successful.  I can only hope that that's a good thing.