Lowe sent to Horcoff this response: "Go and mourn our losses with all the people, and pray that this off-season we might have success. We in management will also mourn, but we will do so secretly, away from the people so that they do not lose faith in us. Thus we will go again into the off-season with strength from the Almighty, and if we fail again and are fired, then so be it."

So Horcoff did exactly as Lowe had asked. He remembered all of the good things that God had given them and he prayed: "O God Almighty, everything is possible for you. Not even the stupidest of managers can prevent your team from winning if you choose to make it happen. You made the heavens and the earth, and you invented the great game of hockey. You are the Lord of all things, yes even of the very sporting events that we participate in day after day. You know all things. You know that it was not with malicious intent that Smyth and Penner were sent away for almost nothing, but rather, it was out of an intent to make this team better. I'm certain that if a Stanley Cup was promised by keeping them, he would have kept them in a heartbeat. Yes, he acted this way out of deference to you, believing that you would bless the many assets that we have received, that their usefulness would far surpass what is expected, and that you will lead us to victory because we continue to show ourselves faithful through this time of distress."

After watching the Kings for the dozen games since Dustin Penner's arrival, I'm not particularly optimistic about their chances, especially with Justin Williams and Anze Kopitar on the shelf. As you probably know, I've been counting scoring chances for these games, and the results aren't pretty: 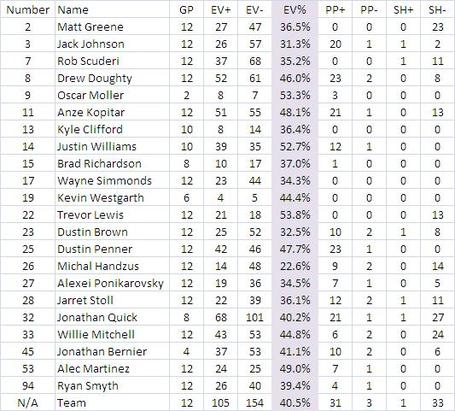 That right there is not the mark of a good team. This team has been drilled at even strength in a few of their games and beaten in most of the rest, although they did outchance the Avalanche in their last outing. Players who stand out as being pretty good in lesser roles are Alec Martinez and Trevor Lewis. Martinez I knew about because I've really liked watching him over these last several games, and have thought that he should be playing a bigger role at evens. Given the struggles of Jack Johnson, I'd like to see Martinez paired with Rob Scuderi to take second minutes and have Johnson move down to the third pairing with Matt Greene. I don't think it will happen, but that's what I'd like to see. As for Lewis, I hadn't really noticed him much to be honest, but after tallying these results he really stands out among the guys who weren't playing on the top line (those would be Williams, Kopitar, Penner, and Moller). Honestly, the result is almost unbelievable: his chance percentage at evens is 53.8% and the next closest regular forward on the bottom lines is Ryan Smyth at 39.4%. That's some crazy stuff. Anyroad, Lewis scored a beauty goal against the Avalanche, but it was only his third of the season, so it's not like the guy has a tonne of offense. Still, I expect he'll get a much bigger role with a couple of the big guns on the shelf. Those bright spots aside, the Kings will need to turn things around right quick if they hope to do anything at all in the playoffs.