The Edmonton Oil Kings played back to back play off games against the Red Deer Rebels in Red Deer March 25th and 26th. The Rebels were victorious on both the Friday and Saturday night games, but both were definitely playoff games in terms of effort level and physical intensity for many players who are looking forward to being drafted in the NHL entry draft this summer.

The Edmonton Oilers are of course in a position to have another top draft pick this summer. Currently the Oilers are in the 30th place and at this moment have the best chances at the overall top pick. Ryan Nugent-Hopkins was born in Burnaby BC and was drafted first overall into the WHL in 2008 by the Red Deer Rebels. Although once again there is no consensus on who is the top pick for the entry draft this year, RNH is projected to be in the top three.

Bruce McCurdy was also able to speak with RNH in November, as the media pressure was starting to ramp up and the two discussed playing weight, and the World Juniors. Currently RNH is trying to get his team to a championship and let the draft worry wait.

Following the Saturday evening game, I was able to catch up with this top prospect for a few minutes, here's what we had to say. 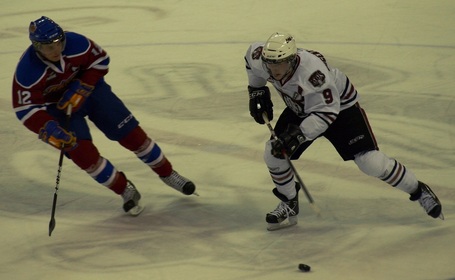 Copper & Blue: You've been shooting more in the second half of the season, was this a conscious decision?

Copper & Blue: You're playing on a really strong defensive team, you must pride yourself on your defensive play, does this carry through to your even strength scoring?

Ryan Nugent-Hopkins: Yeah, this year I've really been focused on my defensive play. I've been working hard on it in practice and made a conscious effort to improve on that, so I hope it pays off.

Copper & Blue: The Oilers must be talking to you already?

Ryan Nugent-Hopkins: Yes, I've talked to them a little bit over the past few months. It's [the draft] getting pretty close right now, and I'm getting pretty excited about it.

Copper & Blue: What do you feel that you can bring to a developing team?

Ryan Nugent-Hopkins: I know myself, I'm still developing so I think that if I get involved with a developing team, it will be a really good fit for me. I think the Oilers are a really fast, young team and I think that I can help them out that way too.

Copper & Blue: You've reminded some in interviews that you're still just a kid who likes movies and video games with your friends; can you tell us some of your favourites?

Ryan Nugent-Hopkins: Legends of the Fall is one of my favourite movies. The Green Mile is another. I like older classics but some new action movies are pretty interesting too. I like just hanging out with the guys and playing video games whether its NHL or it's Call of Duty, anything to just kick back and relax.

Ryan Nugent-Hopkins: Yeah, I'm still in grade 12 and in my last semester, just two classes left and then I'm done.

Copper & Blue: How are you finding the balance, the playoffs are going to get in the way?

Ryan Nugent-Hopkins: Well our teachers at the school know that we're pretty busy with hockey and stuff, so I mean they're pretty cool about it. We have a guy, Kevin Robertson working with us at the school to get our homework for us and stuff, and help us out that way. It's looked after pretty well and very professional.

Copper & Blue: Are academics a little bit of a priority for you as well?

Ryan Nugent-Hopkins: Yeah, I know my parents have made sure that I take pride in my academics as well. I definitely want to get through all of my courses and I do as well as I can.

Copper & Blue: Thank you so much for your time. 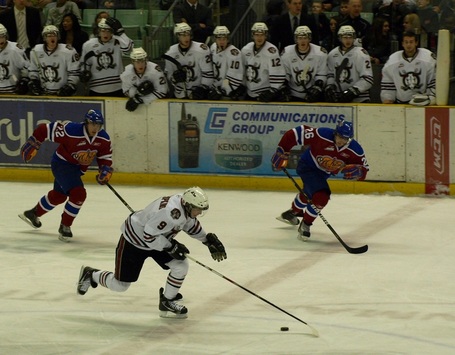 RNH is poised and personable. He has obviously taken the advice that has been given to him concerning how to conduct interviews. His responses were honest but short and worded to be positive and optimistic. After receiving short answers to my main line of questioning I decided to see what he would have to say about some of the more personal issues. Someone had asked me, in all seriousness, what his favourite video game was or his favourite food. I laughed at the time, but said we'll see. After speaking with RNH about hockey, it felt appropriate to ask more about him as a person. I really think that Hopkins appreciated this, after being seen as a top prospect and reading many of his interviews I think that Hopkins may be starting to feel like less of an individual of interest, but rather a player. The tone of his voice changed and he smiled more as he spoke of what he is doing in his off the ice time. There will surely be more to hear and read from this remarkable young man in the coming months. 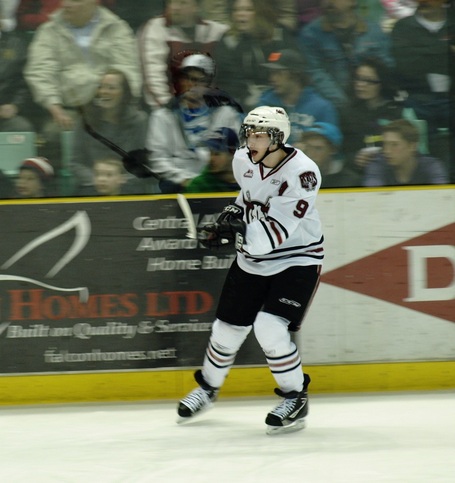