Keegan Lowe: Second Generation Defenseman And Proud Of It

Share All sharing options for: Keegan Lowe: Second Generation Defenseman And Proud Of It

Keegan Lowe, talented and from a sporting family has grown up feeling the pressure that having a six time Stanley Cup Champion father and two time bronze medal alpine skiing mother would bring. This year Lowe will be drafted in the NHL entry draft. Unfortunately for Lowe I am just like everyone else that talks to him, we can't help but see bits of his dad and compare the two. Lowe Jr. takes that in stride and is of course honoured by the comparison. He is an intelligent hockey player and young man. He comes across as a natural and confident leader, and is well spoken. Growing up with a family that is constantly interviewed, Lowe has the knack for speaking with the press and it seems as though it is second nature for the youth.

Keegan will make a hockey career for himself, but he will no doubt always feel that comparison to his father's career. One can't help but wonder if this is one of the reasons why Wayne Gretzky's children don't play hockey. Of course, Gordie Howe's sons not only played hockey, but they even made careers for themselves with Howe Sr. was still playing.

Keegan Lowe was hit by a linesman in the closing minutes of the final period of game two of the first round of playoffs between his team, the Edmonton Oil Kings and the Red Deer Rebels. Here is what the young defenseman had to say on the hit, his goal the previous night, anticipating the NHL entry draft and having an experienced hockey dad.

Copper & Blue: That was a vicious hit by the linesman in the final minutes of the game, how do you feel about that?

Keegan Lowe: I'm alright. They [the officials] just didn't want things to get out of hand. They [Red Deer Rebels] took a run at one of our younger guys who was playing good for us. I just wanted them to know that that is not going to be alright for the rest of the series because we're going to be in there. Obviously that's what I was trying to do, but the linesman just came after me. They're trying to keep it a tight game but we're not going to stand for any of that stuff.

Copper & Blue: This is your first playoff series; did you have anything that you were anticipating going in?

Keegan Lowe: Not really, it's playoffs. Obviously you want everything a notch above everything else. Everything's faster and quicker. The hits are harder. You just have to be on your game, you have to be ready for everything that's going to happen. It's exciting hockey and it's really fun to play.

Copper & Blue: How about that first playoff goal that you had with your dad in the stands?

Keegan Lowe: It was awesome. There was great work down low by our forwards, they squared it out in the slot and I just stepped into it. If it wasn't for the work by our forwards down low by the goal line the puck would never have gotten to me; a lot of credit to them.

Copper & Blue: I notice that your play reminds us of another player. Do you consciously try to play like your dad or is it all natural?

Keegan Lowe: I've been told from a lot of people that I look a lot like him, just with the way I carry myself and such. I didn't get to see him play a lot, so it must just be in the genes. I'm just playing my game. If it resembles his, great, he was a great player so that's good for me.

Keegan Lowe: [laughs] I wasn't even thinking that, my dad about that. It's my first initial, my last name and my number. It just so happens to be the same.

Copper & Blue: How are you feeling going into the draft this summer?

Keegan Lowe: I'm not really thinking about that right now. Obviously it's in the back of your mind, you can't really get it out of there. Right now, our main focus is the playoffs right now; going home, taking two wins at home and then coming back here and we're ready for a battle. So I'll think about that when it's time but if I'm doing what's best for the team right now that will help me in the draft too.

Copper & Blue: I can't help it, you're not day dreaming at all about what team you would like to play for?

Keegan Lowe: It's obviously a dream to get drafted into the NHL let alone to play in the NHL. If I get that honour, if I get that opportunity, I'll be happy with anywhere.

Copper & Blue: Is it helpful that you have your dad that you can turn to for any questions or any anxiety that you might have?

Keegan Lowe: Yeah, he's a great mentor and a great coach. He's been with me every step of the way. Obviously he wants to keep the coaches in charge with our development and what the team's doing but he's always got pointers for me here and there like most hockey dads will. Obviously mine has a little more experience than most. It's a great asset to have.

Copper & Blue: How do you feel about your chances for the rest of the playoff series?

Keegan Lowe: We're having short term memory about these last two games. Guys just have to analyze it, think about it, go over some video, correct the things that we did wrong and get on with the next game. We're going home; we know we have to win one game in this building in order to win the series. We're going to go home in front of our crowd and we're going to come out as hard as we can and we're going to try to steal both of those games. We still have to get one here. We're optimistic about the rest of the series, and I know that we can do it.

Copper & Blue: Thank you so much for your time Keegan. 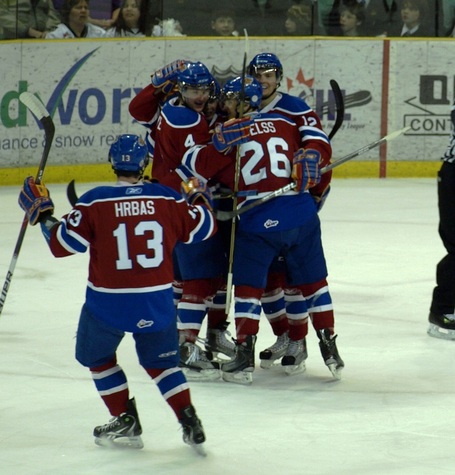 I liked Lowe's response to my question concerning his style of play and the comparisons. I myself know that I saw his father play, but I don't have any real memories of it first hand. My comparisons and memories have to come from videos and highlights that thanks to our modern age have become available. I'm not sure whether Lowe Jr. has seen more or less of his father's play than me, but really comparisons would happen no matter how Lowe carried himself on the ice.

In the meantime, Keegan will play his last two, or hopefully more if they can get through the first playoff round, WHL games in the same arena, on the same ice where his father played out most of his NHL career. 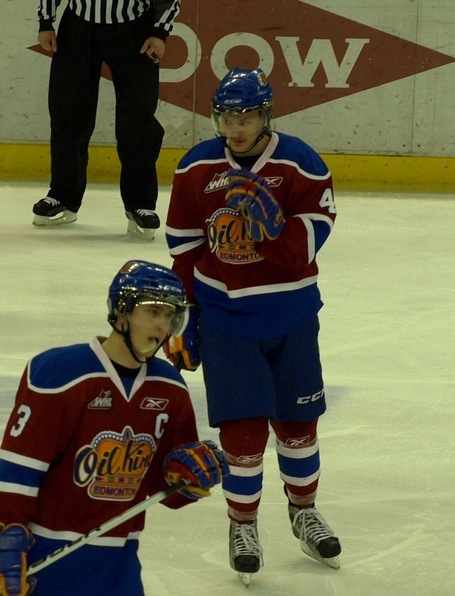