The Enmax Centrium is a great arena for junior hockey. You have an open view from the concessions and along the concourse out to the ice. You can see the game from your seats or your way back from the beer stand or the washroom. I tried to decide how it compared to the Cox Convention Centre in Oklahoma City and I must say that the Centrium felt bigger, and the openness really helped with that. The arena will be undergoing a facelift this summer when they add in more seating around the corners. At the moment the upper bowl seating is only along the sides. The people who work at the arena are great, but this might also have to do with the increase in visitors they are seeing. Everyone is eager to show you where to go or to open doors for you, well me, when my hands were full. I can't say enough about their hospitality. Bruce McCurdy, hockey fan extraordinaire and walking hockey encyclopedia was also in attendance. His take can be found here.

The first period was much quieter than the opening period was in game one. There were no fights, and the fans weren't quite sure what to make of the large group of fans from Edmonton that seemed to be around every pillar. Oh who am I kidding? Red Deer is equally split with Edmonton Oilers fans and Calgary Flames Fans, and even Edmonton Eskimos and Calgary Stampeder fans. These fine people know all about controversy and getting along. They pride themselves with that and for good reason. 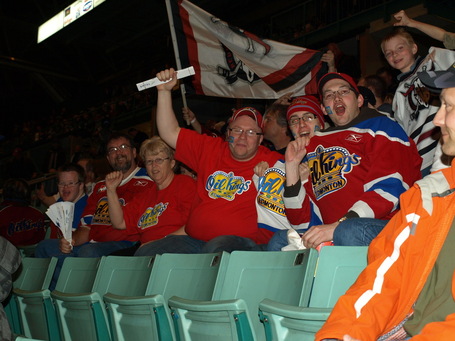 The scoring opened up with of course Ryan Nugent-Hopkins, I mean who else were you expecting for me to say it was? The second goal was a beautiful wrap around from Red Deer's Daulton Siwak. Both were even strength goals, and took the wind out of the sails for the Oil Kings fans in the stands to a certain extent. With less than a minute left Edmononton's Jordan Hickmott got the Oil Kings on the scoreboard, 2-1 Rebels. There were no fights in the period, but lots of pushing and shoving and each team took two penalties each. It was as if in game one both teams wanted to see how far they could push the other and in game two they were ready to play some hockey. Again, it looked as though goaltending and defensive play might be the biggest struggle for the Oil Kings. The Oil Kings lead the period in shots 10 to 7. 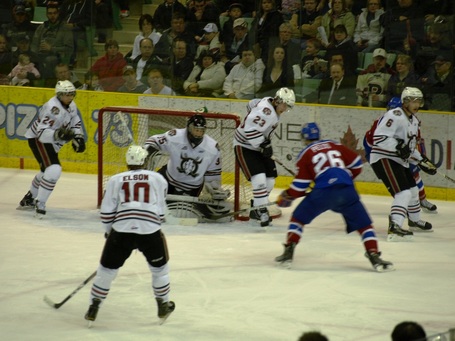 In the first half of the second period, each team took one penalty each and play was fairly tame but fast paced. The Rebels took the first penalty for cross checking, and soon after the Oil Kings took a roughing call. Neither team capitalised on their man advantage. Red Deer next took a interference call, and at 14:05, the Red Deer Rebels' Adam Kambeitz scored short handed. The Oil Kings were struggling to compete against the Rebel's defensive style of play. 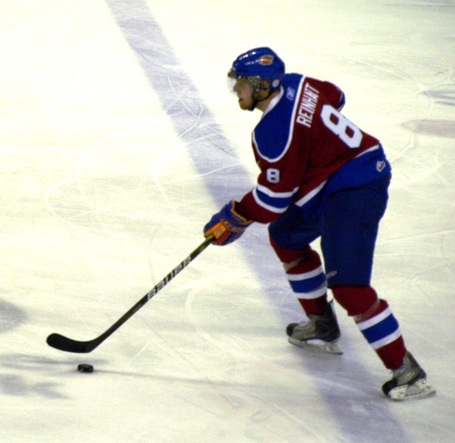 With nearly 3 minutes left in the second period the first fight of the game broke out, the Oil King's Rhett Rachinski took an instigator, fighting major and 10 minute misconduct while Mathew Dumba the other fighter received only a fighting major. What caused the fight? At centre ice, Rebel Matt Dumba made a dangerous head shot on Kristians Pelss shocking many in attendance. It was an unnecessary hit, but thankfully Oilers' prospect Pelss was safe. 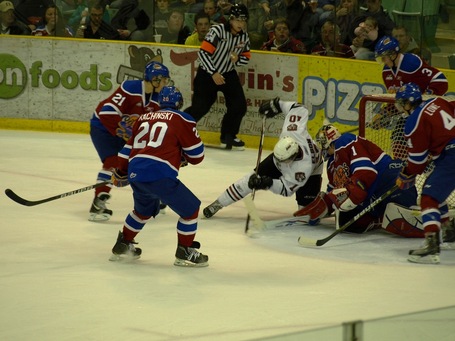 The last two minutes of the game took a very long time to expire with penalties called for both the Rebels and the Oil Kings on a regular basis. Before the end of the period, the penalty box was so crowded it looked as though players were sitting on each other's laps. The penalties called were for cross checking, roughing, slashing and even RNH took an unsportsmanlike diving penalty. The third period ended with the Rebels leading 3-1 and both teams with 11 shots each. 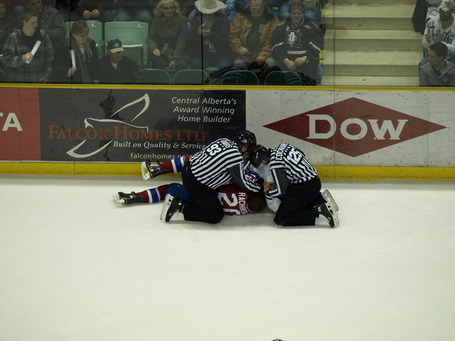 The third period saw many, many penalties for interference on the goaltender, tripping, roughing and high sticking. The Rebels took 3 penalties, the Oil Kings 2 before the Rebels' Justin Weller scored an even strength goal at 12:38, 4-1 Rebels. With less than three minutes to go in the game, things really got physical and the Oil Kings appeared to have completely lost their cool. The Oil King's Travis Ewanyk and Colin Archer each took unsportsmanlike conduct minors and 10 minute misconduct penalties, so were tossed from the game. 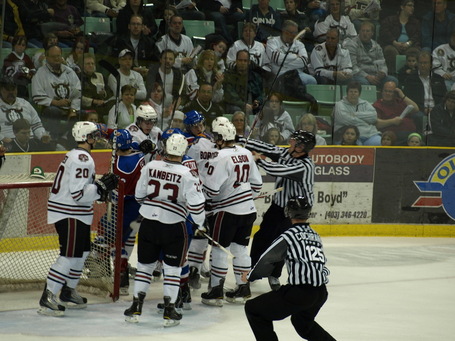 More roughing followed at 18:13 with Oil Kings Cameron Abney, Griffin Reinhart, and David Stephens and Rebels Brad Deagle, Colton Mayor, and Tyson Ness all taking roughing penalties once everything was sorted out. The emotions were clearly high for players on both teams. Klarc Wilson of the Edmonton Oil Kings took a roughing call at 18:32 and the Rebels were able to capitalise, Adam Kambeitz scored the Rebels' final goal making it a 5-1 hockey game. Keegan Lowe took offence to another hit against the Oil Kings and received a shove from a linesman than looked unnecessarily hard, no further calls were made. The Oil Kings fell behind in shots, 7-10 and will need to find a way to leave the memories of this game in Red Deer. 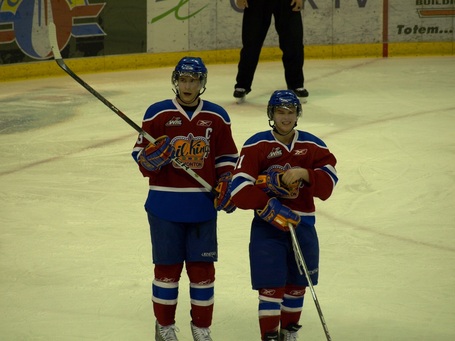 Following the game Oil Kings head coach Derek Laxdal told media "We were undisciplined. We didn’t understand that it was going to be an emotional game. You’ve got to be able to control your emotions or they will control you." This will surely be the message that was conveyed to the players, trying to bring settle the team and prepare them for a successful home game on Monday.  The nail in the coffin for the second game in a row came from the defensive play of the Rebels "We nullified two power play opportunities [by taking penalties]. We lost Chinner for two, five and 10," Laxdal said of the calls in the second period following the centre ice hit on Pelss. 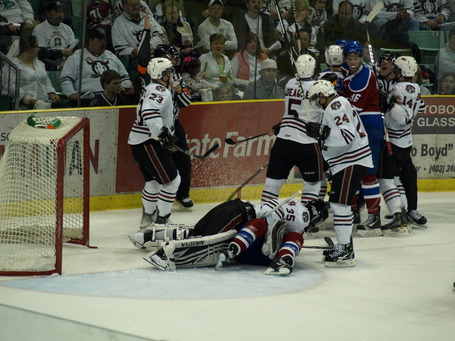 The Oil Kings will need to figure out how to break through the Rebels' defence. They also need to work on their positioning. At times, Darcy Kuemper allowed some perfectly placed rebounds and his net would be wide open but there was no one in an Oil Kings jersey ready to pounce on the opportunity.

Rebels' head coach Jesse Wallin said of his team "We were just sharper [than Game 1],"  and of their play "We were pretty tentative at times, but we got better. Wingers we’re making better decisions, our D was controlling the puck better and we got our feet moving." They certainly did get their feet moving as the Rebels were at all times like a wall across their net or the rink and made it difficult for the Oil Kings to generate offence at times.

The Oil Kings got on their bus immediately after the game to go home and get ready for game three at Rexall Place. Tickets are still very affordable and available for the home playoff games both Monday and Thursday. When was the last time you saw playoff hockey in person? That's right, it's been a while. Any support the Oil Kings can get from their fans and Edmonton in general will surely be appreciated.

I really should give another shoutout to my favourite people at the game last night, the WHL off-ice officials. Again, these men are volunteers who love the game. They work the penalty box, the shot clock, update the WHL website with goals, they track shots and assists pretty much everything that needs to be done for the game that we take for granted. These men are a great group, fun to be around and of course have made sure that I know I am welcome any game I want to cover.

Here is Albert's joke for you: An old couple are sitting on their front porch one evening. The man suddenly says "I love you." The wife is surprised and says "Was that you or the beer talking?" The husband replies, "That was me talking to the beer."

Thank you for all of your help gentleman.