With a Rebel Yell

Share All sharing options for: With a Rebel Yell

I don't know what you did last night, but I was at playoff hockey, and it was glorious. The Edmonton Oil Kings, the other oil in town, holds much interest for those living in Edmonton and Edmonton Oilers fans for several reasons. First of all, the Oil Kings are bringing playoff hockey back to Edmonton. Secondly, the Oil Kings have two Oilers prospects on their team; Kristians Pelss and Cameron Abney. Third, Kevin Lowe's son Keegan is playing for the Oil Kings and is draft eligible this year. Finally, the Oilers just may end up drafting Ryan Nugent-Hopkins this summer in the 2011 NHL entry draft. See, 4 more reasons that you probably needed to follow these games. The away games in Red Deer will be televised by Shaw, and as always you can hear the games on your radio on the Team 1260 if you are not able to attend.

The Oil Kings lost in the third period, but it was a physical and entertaining battle. Trailing at first in goals and shots the Oil Kings stormed through the second period making it a much closer game. Finally despite trying the game in the third period, 2 goals by Ryan Nugent-Hopkins sealed the deal for a Rebels' victory. If you are on the bus to Red Deer tonight, you will have more of this to look forward to, if not, maybe you want to check out a home game next week at Rexall Place. Tickets are affordable for the whole family and it's great entertainment; this is playoff hockey.

For your reading pleasure I will show you a few photos from the game and let you know what you missed. Bruce McCurdy put together his take on the game as well in the Cult of Hockey. 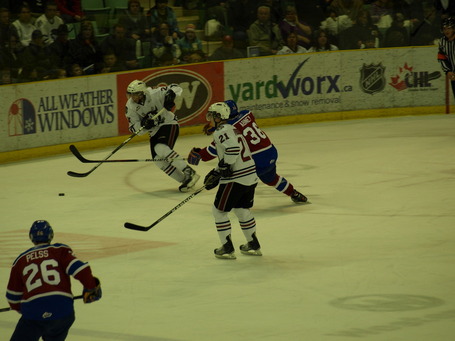 The first period started with 3 roughing penalties called 32 seconds in, 2 to Red Deer and one to Edmonton. These roughing penalties were followed by even more roughing penalties in the following minutes. In between the roughing calls, Pelss was called for hooking. The ensuing Rebels power play netted a goal for the home team. The second assist was to the Nuge, RNH. At 12:20, the Rebels scored again, making it a 2-0 hockey game and slightly depressing for the few Oil King fans in attendance. There was not a full out fight in the first period until 17 minutes in when Oil King Adrian Van de Mosselaer fought Rebel Brett Ferguson. The fight may have been the spark the Oil Kings needed, Keegan Lowe scored soon after, cutting the Rebel's lead in hald. The period ended with the Oil Kings behind 2-1 on the scoreboard and behind in shots, 14-10. There were 8 roughing calls in the first period, 8 things were just a tiny bit physical you could say. 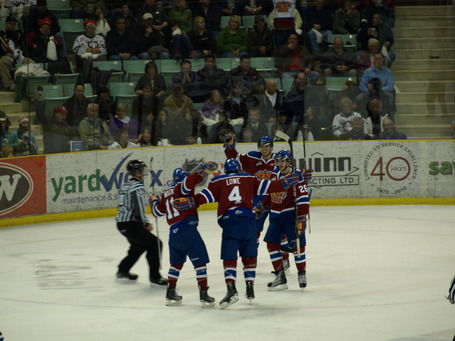 It was indeed in the second period that the Oil Kings were able to find their game, or get the crowd out of their heads, even with the fire alarm going off midway through the period. Apparently this was the second time this season that someone thought it was a good idea to pull the fire alarm. It all added to the entertainment of the game. There was a second fight, then a third of the game during the second period and only a single goal scored, and by Oilers' prospect Abney at 15:43. Through the second period the Oil Kings lead in shots by a large differential, 19-4 and tied the game, 2-2 going into the third and final frame. 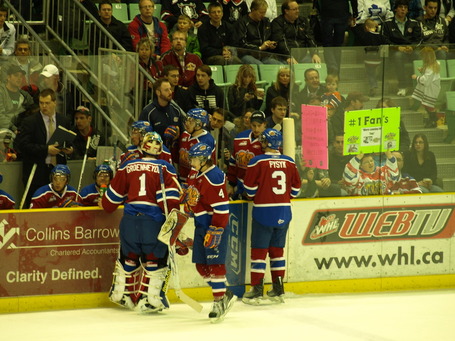 Red Deer would find the back of the net next however when Andrej Kudrna scored nearly halfway through the period. That was soon followed by Michael St. Croix trying the game up once again for the Oil Kings. Sadly, that was all the Oil Kings would be able to score for the rest of the night. RNH scored even strength at 14:25, and then again on the power play at 15:31. Shots were 8-6 for Edmonton in the third period, but it seemed the two power play goals on the game were the difference makers. That sounds pretty familiar doesn't it? 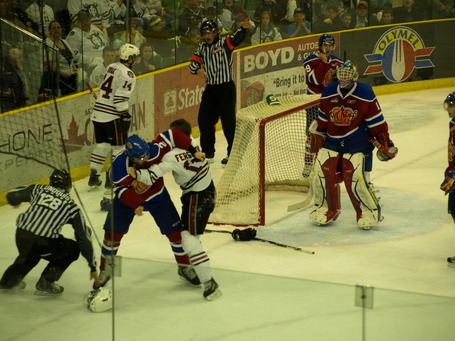 The Edmonton Oil Kings can compete against the Red Deer Rebels and they can win, but their goaltending will be the big questions mark. The Oil Kings lead the game in shots, 37 to 24, but lost 5-3. If goaltender Jon Groenheyde can find his game and his focus this can be a long and interesting playoff series filled with fights, goals and hopefully many cheers for Edmonton fans. 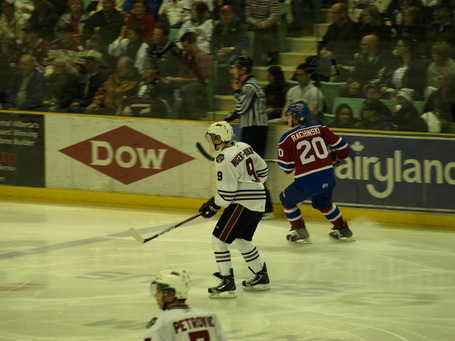 I know you're wondering, now what about that Nugent-Hopkins kid? Well, I was asked by Ovenchicken about his play in the defencive zone, without the puck. You see folks, there doesn't seem to be many times when RNH is not touching, passing or shooting the puck. When he has the puck, he has full possession of it and can make other players look foolish. When he doesn't RNH makes himself huge. He is blocking shots using every inch available to him. Quick on his feet, Hopkins is able to shift his focus and positioning in order to block subsequent shots, and from different directions with ease. Hopkins was on the ice for the Oil Kings second goal, but was busy covering two men as it was and couldn't prevent the Lowe goal on his own. I'm sure I will have more to report on this young man after the next game. 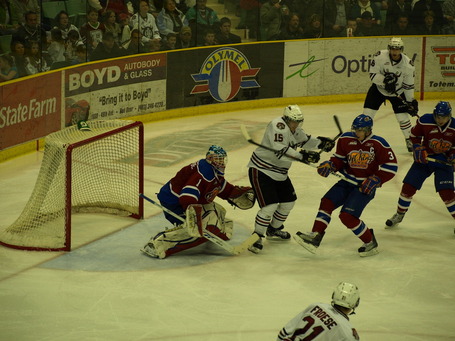 I heard a couple of jokes from my favourite people at WHL games, the off ice officials. These folks are volunteers and always eager to help you out or just have someone new to talk to. Why doesn't Red Deer have an NHL team? Because then Edmonton and Calgary would want one too!

What wasn't a joke, was how good the Oilers prospects looked. Abney had a goal and was +1 on the game. Pelss had an assist and was +2. Both played a physical game and made some smart plays. It is true that there are more mistakes made at this level of hockey but I don't see that that is necessarily all bad. When players make mistakes, things are more unpredictable and other players have to make even more snap decisions an think on their feet. You sometimes and in some ways have more of a chance to see a player's hockey sense. 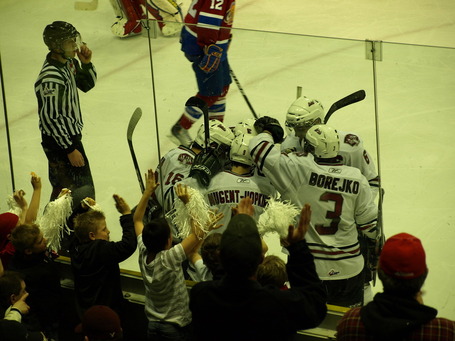 So many in the crowd, including the Red Deer locals were eager to see RNH play and the game winning goal was just the icing on the cake. I was fortunate enough to bump into another Edmontonian who was in Red Deer for the game. Mr. Kevin Lowe was on the opposite side of the press box and had a warm smile for me when he walked in and returned my "hello." Following the game, I wanted to ask Lowe a few questions. It's a good thing that I'm patient and determined. Waiting it out, Lowe looked to be on his way out. I asked him for a moment and he said sure. "Who are you here to see?" I asked, was it his son, the Oil Kings or even some potential draft picks? Lowe was quick to respond that he was indeed there to watch his son play in his first juniors playoff game and of course to see the Oilers prospects. When asked about Hopkins he smiled and said, something along the lines of "well you know..." Bruce and I also tried to ask about Keegan Lowe's expected drafting in the NHL. Just like any proud father, Lowe's eyes twinkled and said that his son is expected to go around 100, but that there are many teams that have him ranked higher. Lowe Sr. seemed uncomfortable answering whether or not the Oilers were looking into the prospect.

So, it was a wonderful night in Red Deer at the Enmax Centrium Arena, a place that smells very strongly of cheese. I'm told that the smell wafting up through the air was from some delicious pizza. This pizza of course had a wheat crust, so I can't tell you how it was. No matter, I hope that anyone and everyone coming down for game number two will be loud and proud. Lowe Sr was aware of the bus and proud to hear of it. Let's help those Oil Kings out in any way we can shall we? No need to fear Wooly Bully, he seems nice enough. 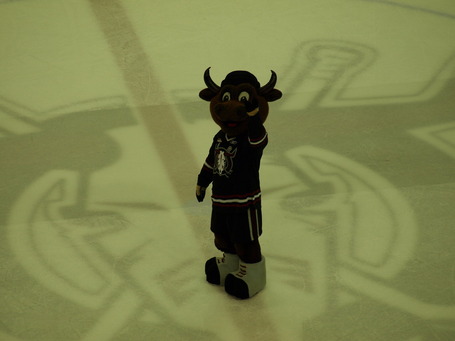