The crushes in round one kept right on coming yesterday with Nikolai Khabibulin destroying Antti Niemi and moving on to face Rick DiPietro in the second round. It will be interesting to see if The Maginot Line can compete with The Stinky Meat Project, but before we get there, we've got the rest of the first round to think about. That continues today with fourth seed Vincent Lecavalier taking on thirteenth seed Danny Briere, two forwards on long-term contracts with no-movement clauses. The case for each player after the jump. 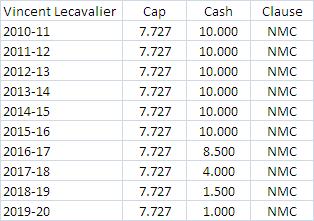 There is exactly one team in the league paying their third-best forward ten million dollars, and it's not a team spending to the cap. Ouch. Vincent Lecavalier has the seventh highest cap hit in the NHL, and it would probably be fair to characterize the player as an "offense-only" kind of guy. Over the last four seasons, he's generally been among the team leaders in offensive zone starts (both as a sum total and as a percentage of end-zone starts, although that's changed somewhat this season), and hasn't consistently played the best the opposition has to offer. He gets loads of power play time, but hasn't play a big role on the PK in either of the last two years. The result is a player in 14th place in total points since the lockout, which is good, but not really when you're paying him that much and the rest of his game is a bit of a disaster. Oh, and he's turning 31 this April, so the above deal represents his 30 y/o to 39 y/o seasons. Ugly stuff.

The contract is obviously less oppressive than Vinny's, so the question here is whether or not Lecavalier is a much better player than Briere, who's being paid for his 33 y/o to 37 y/o seasons in the above deal. Like Lecavalier, Briere doesn't handle tough minutes and generally gets put in offensive situations - he just doesn't score quite as much, and he's not as durable. Since the lockout, Lecavalier has 199 goals compared to Briere's 157, 454 points to Briere's 363, and 458 games played to Briere's 381. If he look at just the last four years, Lecavalier leads 112 to 100, 271 to 210, and 296 to 252. Is that difference in production enough to offset the extra cost and risk associated with Vinny's deal going forward? That's the question.

Which player has a worse contract going forward?