So here we have it, another battle of the basement and it appears there will be one more yet before the season is out. The Colorado Avalanche, 29th and the Edmonton Oilers, 30th faced off at Rexall Place for hockey night and Canada and likely the last home game of the season for me. What that also meant was that I just made the trek down highway two immediately after the game, so this will be more concise than usual. 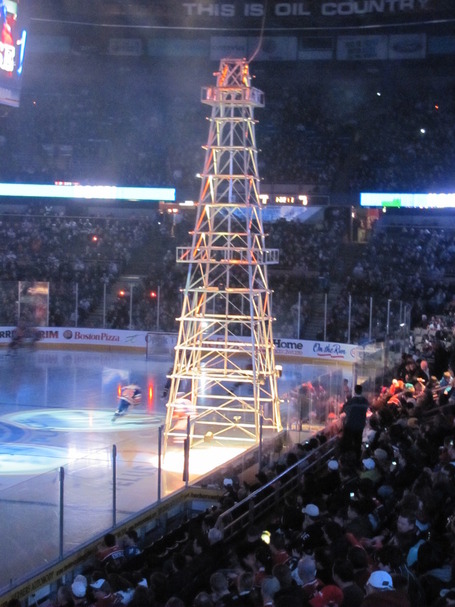 The Oilers seemed to have started out on the right foot, they were dressed for the game, they avoided injury during warm-up and stepping out onto the ice. Ryan Jones attempted to step things up a bit as well, just 11 seconds after the puck drop when Jones fought Eric Johnson in a very lengthy fight; a minute and ten seconds. Jones was the definite victor, and the crowd at Rexall Place felt electric. Surely this would be just what it took to energize the Oilers.

The problem was of course the the fight did not spur the Oilers on to much of anything through the first period. In fact it was nearly 7 minutes into the game before Jordan Eberle got the team's first shot on net.

The Avalanche owned the Oilers through the first frame. The group of us watching the game were not impressed that all of the action was on the other end of the ice. There were so many give aways you might have thought it was Christmas. In fact someone in our section said " If the Avs score now Khabby should get an assist since he just gave it away." Things were not looking up for the Oilers, and they looked very flat. In fact, at one point all five skaters were literally a straight line across the width of the ice. It was like the flying V but this line it was an I. Shortly after, Matt Duchene did put the Avs up by one. By the end of the first 20 minutes of play, the Oilers had trailed the Avs 6 to 10 in shots. 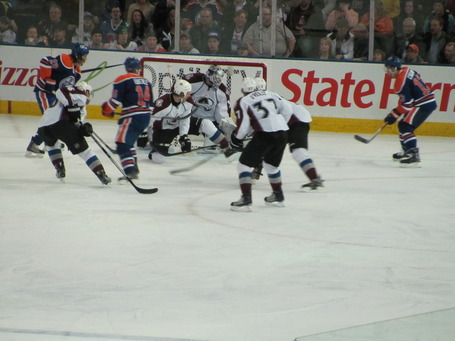 The Oilers started the second period out quite passively. They were turning the puck over less, but mistakes seemed bigger somehow. It did take the Oilers a while to generate much of anything, but once they did find their game Jordan Eberle was able to score on the power play, tie game. When Kevin Porter scored for the Avalanche nearly four minutes later, folks really started accepting that the Oilers might be able to escape taking any points for this match-up. The period ended 2-1 Avs with the Oilers once against trailing in shots, 7-11.

The third period was much more exciting for Oilers fans. They were able to generate shots enough so to catch up with the Avs. As such, the Oilers maintained much better puck control, and played a far more disciplined game. Teemu Hartikainen and Linus Omark showed some Euopean finesse and their ability to maintain puck control, wowing the crowd. Hartikainen nearly lost his footing at one point, but not the puck, well not at first.

Linus Omark made a fantastic play in the corner, turning and skating with the puck, and shooting on net. Kurtis Foster must have touched the puck, or the puck touched him as it went in the net, because from where I was sitting, Omark scored an amazing goal to tie the game. The Oilers lead the Avs in shots for the final period of regulation play 16 to 5.

In overtime, the Oilers lead in shots again, but were unable to score even with a power play late in the extra five minutes. This meant shootout! i was disappointed that I was not at Rexall place for the first NHL goals for either Chris VandeVelde or Teemu Hartikainen, but I had tried.

The crowd once again roared when Linus Omark had his turn on the shootout, and were slightly disappointed with his moves. Omark like all of first 6 shooters did not score. With the extra shooter, Colorado's Ryan Stoa was able to seal the deal, 3-2 Avalanche. 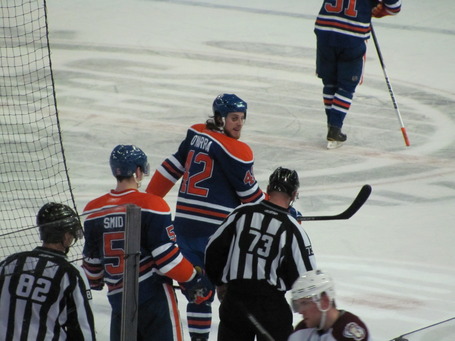 Because I was in the stands, I think that the Oilers weren't that bad overall. Andrew Cogliano had a good night in the faceoff circle and played a gritty game. Nikolai Khabibulin did his job, he made saves and stayed in his net for the most part, so fans didn't get as scared as they might otherwise have been. The Oilers had a few good scoring opportunities, but will be content with getting one point from this game, grateful it wasn't the full two points.

Next up, the Nashville Predators on Tuesday.