Tales From the Road: Denver

Share All sharing options for: Tales From the Road: Denver

Denver seems too far north to be so popular for tex-mex food, I still need an explanation why that is. The cowboy and old west aspects I understand and make sense. They even make a trip to Denver more interesting in some ways, and more like Calgary. In fact, besides cowboys, oil and gas, there is also some stunning geological aspects including dinosaur and ice age fossil findings and the Rocky Mountains. The Rockies do look different in Colorado than in Alberta. In Colorado in the spring if you look at the right mountains you would think you were in Arizona instead. This is because the Rocky Mountains we see and enjoy in Banff and Jasper were more dramatically glaciated, eroding away more of the soft layers creating deeper valleys and the jagged rugged appearance they have while the mountains in Colorado have been less abused by the forces of nature.

The Rocky Mountains of Colorado are also home to the Coors Brewery. The funny thing is that once the Brewery established itself in the city of Golden Colorado, just outside of Denver, the Colorado School of Mines was soon to follow. It seems with students, if you brew it, they will come.

Denver is also the new and likely final home of the Quebec Nordiques, so this was my first time visiting a team that has been moved from Canada for good. The merchandise store at the Pepsi Centre held some Quebec Nordiques merchandise, but the majority was for the Colorado Avalanche. Looking around the arena during the game, you saw various vintages of Avalanche jerseys and shirts, very few Oilers jerseys and even a Chiefs jersey. 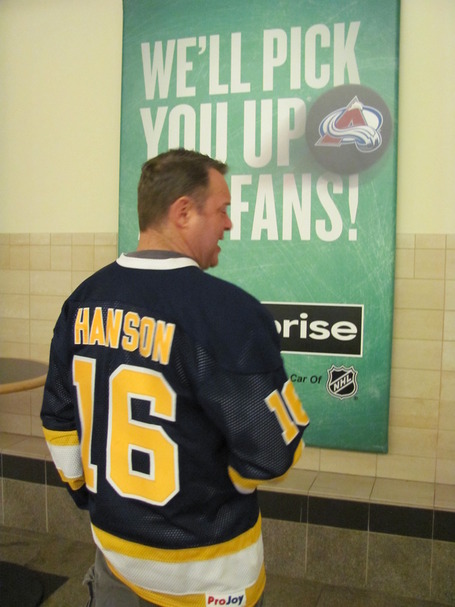 I arrived in Denver February 23rd, 2010 while the Avalanche were continuing their free-fall in the western standings. These were my kind of people. We feel the same pain! Everyone I spoke to had a smile for me, and some even came up to me to tell me how much they liked my Paajarvi jersey. If anyone had anything to say about the outcome of the game, it was a lot of Avs fans telling me the Oilers would surely win. I have to admit I had never had an experience quite like that before.

The Pepsi Center, or even the can, is another downtown arena. It is just outside of the office towers and near the baseball and football stadiums. There is a wide variety of vendors along the concourse, including several bars. The ceilings in parts of the concourse were high and it felt very open. In other areas, it felt a little more closed in and like the Saddledome and Rexall Place. The walkways while wider than Rexall place made me wonder how so many thousands of people move around, as they still seemed tight. This building hosts not only the Avs, but also the Denver Nuggets (NBA) and the Colorado Mammoth (NLL). There must be some hiccups, but apparently not much as I didn't experience any delays. 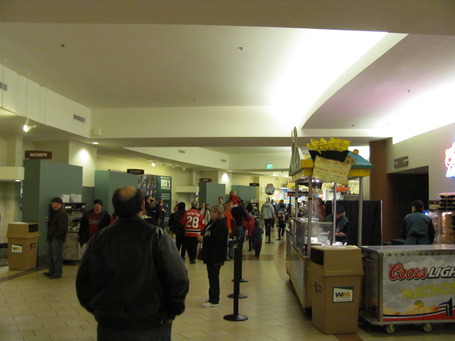 The scoreboard in the Pepsi Center seems old, and the picture, well it wasn't as nice as the one I had watched in St. Paul the night before. I commented on this to the people in the stands next to me. The response was commical. "You see, Kroenke, the owner of the Avs and the building is a big Wal-Mart supporter. He wants us all to shop there, so that's where he bought the big screen and scoreboard." I howled at that, how could you not? It's like when the TSA agent in the Houston airport asked me if I had a moment, he had just saved a bundle on car insurance and wanted to tell me about it. Of course both gentlemen were kidding, but as a Canadian you can laugh not only at yourself, but often at your neighbours for their stereotypes too. 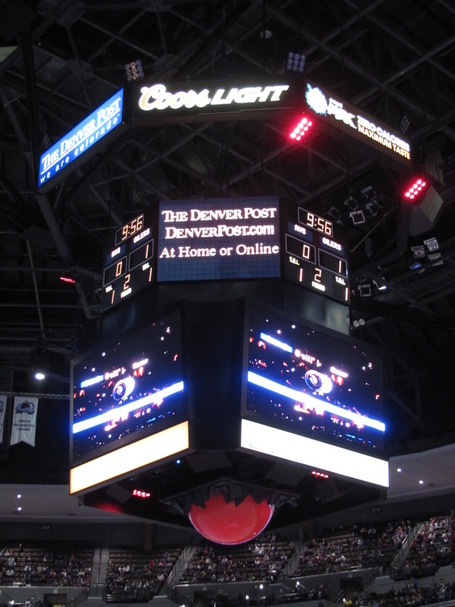 This arena smelled like cinnamon, and depending where you were walking through, which bar you walked by you often smelled celery. They must love caesers and churos in Denver. I also find it interesitng that for the second night in a row, I was in an arena that had distinctive smells like that. The other thing that never gets old for me is the packaging of beer in American arenas. In Canadian arenas that I have been to, beer is dispensed from kegs into plastic cups, or if it's in a bottle, it's poured into a cup. You buy a water bottle, they usually pour it into a cup too. Or, you lose your lid. The idea is that they don't want you to have something you can throw. In the states, they sell beer in what looks like glass bottles, but it's really plastic. They not only sell the beer in these bottles, but they let you take it to your seat! Amazing! There were a few beers drank in the crowd as the Avalanche trailed the Oilers the entire game. 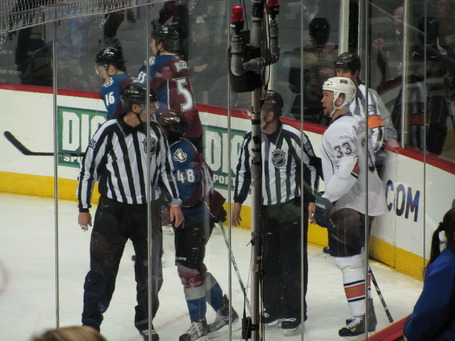 The Avs have a mascot too, Bernie a St. Bernard. Bernie wasn't on the ice as much as some other mascots, in fact I didn't see him on the big screen or milling around the crowd either. Perhaps I was too busy talking to those around me, or maybe this was an odd game for not having that. 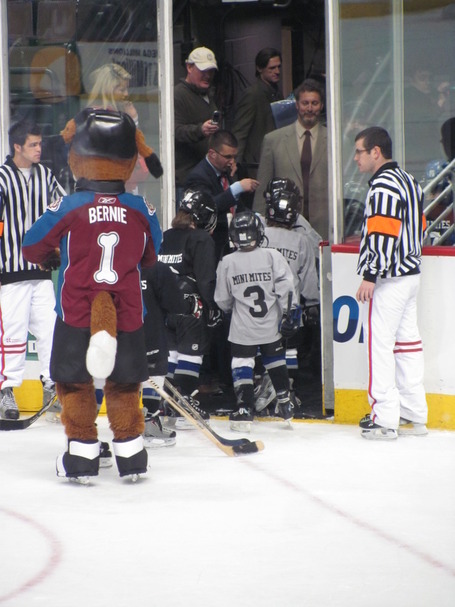 The family sitting behind me had never been to a hockey game before. They had watched them on television, but had never been to a game. This poor family, this is not what I would think to be a great first exposure to a live game. Dubnyk turned away all but one shot in this outing, which ended as a 5-1 hockey game. 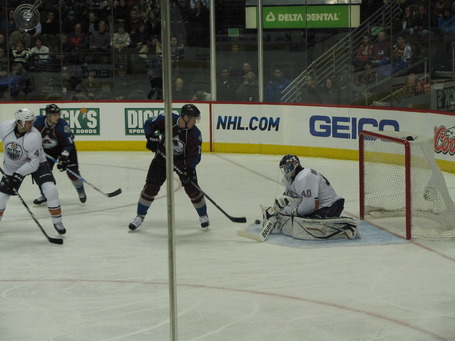 No one commented on Ryan Jones' hair at this one, I think that both teams were too focussed on getting through their pain. Avalanche fans are great, but it's amazing how many in Denver can't stand the Avs. Amazing! But, maybe this is like Calgary once again. Most people claim to love the Flames or hate them. There are a few that don't mind them, but that's a small minority. Some of the fans said that they were embarrassed that I would see the arena with such a small crowd. I looked around and did see some empty seats, but I didn't see how the fans could see this as an empty arena. Hockey is doing just fine in Denver and I expect it will return to it's pedistal as soon as the team is back to their winning ways. With a "rookie" (in his second season, he's no grizzled vet yet) like Matt Duchene, and the ability to attract talented UFAs, Denver should have little to worry about. The high altitude of the city gives it's players a competitive advantage, training at high altitudes with slightly less oxygen makes it easier to perform well when more oxygen is available at lower altitiudes. 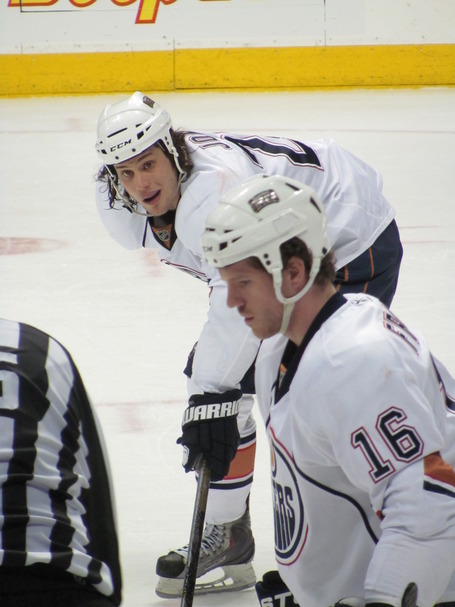 The city of Denver and it's surrounding areas has so much to offer, in terms of sights and culture. If only it was seasonable to have a concert at Red Rocks, just outside of the City of Denver, an amazing all natural amphitheatre during my time in Colorado. No matter, I'm sure I will before too long.