Saturday February 26th was a depressing night in Oklahoma City. The Barons fell 5-0 to the Houston Aeros, the farm team of the Minnesota Wild and had to get on the bus following the game to drive all night to their game in Austin the following night against The Texas Stars, the AHL team of the Dallas Stars.

Every member of the team was hanging their head, especially after a longer than normal address from the coach following the conclusion of the game. What did that mean? It probably wasn't the best time to try to catch up with Oilers' prospect Chris VandeVelde.

VandeVelde is playing his first year of proffessional hockey after completing his degree and time in the NCAA with the University of North Dakota Fighting Sioux. He is also happy to be talked about, but will gladly tell you that his last name is indeed one word, not two. VandeVelde was selected 97th overall in the 2005 entry draft, and signed May, 2010 to a two year entry level contract. So far, in 66 games this season with the Oklahoma City Barons VandeVelde has scored 12 goals and 4 assists but is at minus player at -17. VandeVelde may yet get a closer look from the Edmonton Oilers should their injury woes continue.

Copper & Blue: What made you want to pursue both a degree and a hockey career at the same time?

Chris VandeVelde: I went to the University of North Dakota, it's a good hockey school as well as getting an education. I think that was important to me. I put in my four years there and I think it's good, in case hockey doesn't work out, I have something to fall back on.

Copper & Blue: It's nice that you were able to do both.

Chris VandeVelde: Like I said it's something to fall back on and it's a good school, so it's not like I missed out hockey wise. I think that they developed me pretty well.

Copper & Blue: It was on Taylor Chorney's advice that you stayed and finished wasn't it?

Chris VandeVelde: Ya, Chorns , I was his teammate for two years and he left early. He had a big say in me staying as well as the coaches here and UND.

Copper & Blue: Are you still in good contact with Chorney?

Copper & Blue: You guys have history, it's pretty cool that you have a similar past present and future.

Chris VandeVelde: Well ya, he's been down here parts of the year as well. I get to talk to him and see him almost daily.

Copper & Blue: Say the wheels fall off this hockey train, what would you like to do with your recreation and tourism degree?

Chris VandeVelde: [laughs] whatever I can get, it's just nice to have a degree. I'm not real sure where I'm going with that, but it's nice to have something.

Copper & Blue: Well, that's what I say about my geophsyics degree.  How did the NCAA help you to prepare for the AHL and ultimately for the NHL?

Chris VandeVelde: I think UND is a good school and a good program. I think that the coaches do it the right way there and I got a lot of ice time my four years and each year I got better.

Copper & Blue: You were named the University of North Dakota's male athlete of the year in 2009/10, what did you do differently that year, was it mentoring?

Chris VandeVelde: Naw, it was just off ice, you ‘ve got to contribute with charity stuff and I just had a good year on the ice as well. I think most of it was on the ice play and I put up some pretty good numbers and I was on a good team, so that's what it was.

Copper & Blue: Do you feel any kind of different camaraderie with other players who are university educated?

Copper & Blue: So there is no line separating players that have different educational levels?

Copper & Blue: Has this first year of pro gone the way that you would have hoped?

Chris VandeVelde: Personally, probably not, but that's part of learning. I think that I've made huge strides here since the start of the year but tonight was obviously a tough one but hopefully we bounce back from that. We just have to drop that game and not think about that.

Copper & Blue: Your team is still pushing for the playoffs, maybe you just got a little bit more of the Oilers' experience tonight?

Chris VandeVelde: [laughs] it was just a tough one and I think that the Oilers will turn it around soon too as well.

Copper & Blue:  What do you feel you need to do to take your game to that next level?

Chris VandeVelde: Really bear down defencively and pick up my game offensive a little bit. I think that as long as I'm good defencively the offense will come.

Copper & Blue: Have the Oilers asked you to work on anything specificially?

Chris VandeVelde: They always tell you to work on things, but like I've said, my defencive zone play, skating, my quickness and I'm always looking to improve everything.

Copper & Blue: You are above 50% on the faceoff, do you attribute that more to the mental or physical aspect?

Chris VandeVelde: Faceoffs is a lot mental, it's a lot of timing and competing on a one on one battle with the other guy across from you. Obviously we work on our faceoffs a whole lot out here and I think that that has helped our game and we've got a lot of good centremen on this team we compete against each other in practice so that helps as well.

Copper & Blue: You also have good size to you, do you attribute some of your success to that?

Chris VandeVelde: Obviously strength is a part of faceoffs so..

Copper & Blue: How do you hope your numbers will transition when you get the callup, it's different competition?

Chris VandeVelde: My numbers here are so-so, making the next step I just hope I bare down defencively. I can be a shutdown player, whatever they ask me to do. When I get the shot, I will be ready.

Copper & Blue: You've been a key asset to the Barons' pk, how do you attribute your success?

Chris VandeVelde: PK is paying the price and blocking the shots, and all that stuff. It's outworking your opponent, they've got 5 you've got 4, I think lately its' been a little bit of a struggle, but I think that we still have one of the top PKs in the league, so hopefully that continues.

Copper & Blue: Well I'm hoping you don't have to use your degree any time soon. We would love to see you up with the Oilers, we could use your help with the faceoffs.

Chris VandeVelde: Well, I could contribute I guess.

Copper & Blue: You guess? Alright, thank you very much. 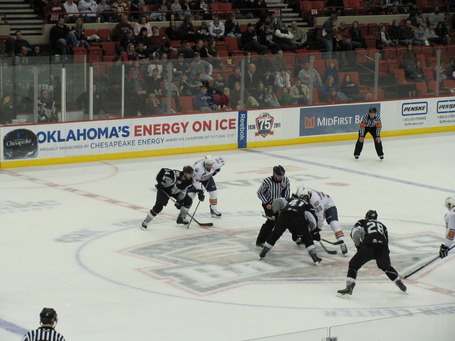 What I had meant was whether or not VandeVelde felt that his faceoff numbers would remain consistent, or how confident he felt going into the next stage of his hockey career but I didn't press the issue, the man had a lot on his mind.  I'm glad he was able to take the time to answer a few questions.

Derek also had a chance to speak with VandeVelde last year, where even then it was noted that the Oilers needed a centreman who can win faceoffs.