A long-time reader e-mailed me yesterday: "I thought Ryan Jones was getting the short end of the Corsi stick because he was playing with terrible teammates.  The scoring chances stuff really opened my eyes and though I would still give him a 1 year deal for a million five, I am slowly coming over to your side on him.  Can you do the scoring chance segments for Cogliano?  He's getting better, right?"

I've got the numbers after the jump.

Below is a graphical representation of the above table with Cogliano's season average and the Oilers' season average marked by the labeled red lines (click to enlarge): 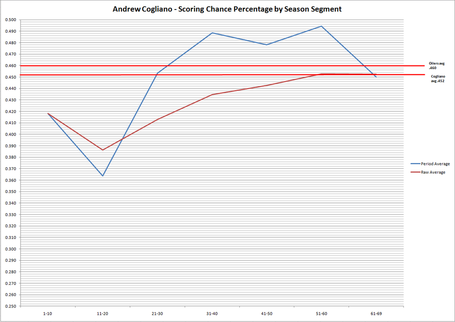 It's not only Cogliano's penalty killing that's improving - his even strength play is slowly trending upwards since the beginning of the season.  However, Cogliano's final chance percentage for 2009-2010 was 45.7% and he's not there yet.